Bigotry is on the rise in “the westerly excrescence of the continent of Asia.”

That unpoetic but topographically-precise description of Europe comes from the Oxford archeologist, Barry Cunliffe.

Whenever voices declaring that European culture is under threat are at their most strident, it’s always worth remembering the actual nature of Europe’s physical form.

As a continent it is nothing more than a malleable contrivance with its ambiguous, historically shifting eastern edge. As a result, it is and always has been, an ethnic and cultural melting pot.

Thus the irony when Europe’s self-appointed protectors take a firm stand in the name of its defense: they so often lack a real appreciation for the very thing to which they have pledged their allegiance.

Why is it that the people who most easily become possessed by ideas about cultural purity are themselves so often culturally impoverished?

Because culture in its richness and complexity is not the real issue.

This is about how individuals respond to the other.

Does the unfamiliar prompt interest and curiosity?

Or does it provoke fear?

Fear in response to the other says more about the fearful than it says about the objects they fear. 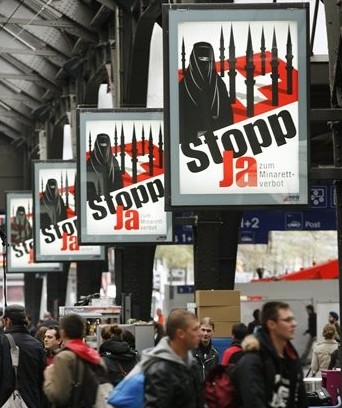 In the latest outbreak of European xenophobia, the minaret has become a missile in a campaign to ban their construction — that is, the construction of minarets, not missiles.

This is a curious iconic transformation. Is the Swiss People’s Party suggesting that Switzerland, in which currently there are only four minarets, is at risk of becoming a missile-minaret launching pad threatening the rest of Europe with Islamization? (This is after all a depiction of missile-minarets ready for launch — not incoming missile-minarets about to explode.)

By Sunday it became apparent that Swiss voters had little interest in dissecting the visual absurdity of the campaign poster — a majority seemed to have bought the implicit message: Islam = violence, death and destruction.

The campaign’s final week of fear-mongering managed to raise support for the ban from 37% up to 57.5%, with passage in the majority of cantons meaning that a constitutional amendment will follow....http://warincontext.org/2009/11/29/the-european-minaret-missile-threat/

Posted by Christopher Dickey at 7:42 AM

It’s glad to see good information being convey. Its a very nice written, and i really like these blog. Thanks for the info.

I really enjoyed reading this blog. These types blogs will encourage our self to get knowledge "War in Context: The Swiss Minaret "Threat"". Thanks looking for more good techniques..and thanks for sharing this most important information.