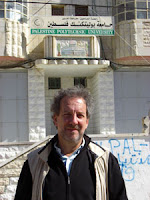 "Gallup and Pew surveys indicate that perhaps 7 percent of the world's Muslim population — nearly 100 million people — sympathize with jihadi aspirations. But of those many millions, only a few thousands actually commit to violence. Our data show that a reliable predictor of whether or not someone joins the Jihad is being a member of an action-oriented group of friends. It's surprising how many soccer buddies join together."...


As one Air Force General said to me: “I was trained for Ds ─ defeat, destroy, devastate ─ now I’m told we have responsibility for the Rs ─ rebuild, reform, renew . Well, I was never trained for that, so what the Hell am I supposed to do? Destroy in just the right way to rebuild?”

Anthropologist Scott Atran's statement before the Senate Armed Services Committee on March 10 is one of the most consistently surprising -- and smartest -- rundowns on the nature of terrorist organizations and the best ways to fight them that I have seen anywhere. It should be read carefully by anyone concerned with these issues.
Posted by Christopher Dickey at 8:28 AM

25 articles on the US Army's Human Terrain System are here http://cryptome.org/0001/hts-salomi3.htm...Scroll down for them all. HASC is looking into HTS. USMC does this well.--John Stanton