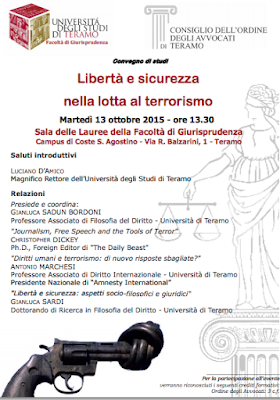 In the Age of Facebook and the Time of Twitter, the age-old clash between free speech and security is not about editorials in the press, graffiti in the streets or speeches on street corners. It’s about the ability of violent extremists to reach a global audience with a compelling narrative that attracts recruits, volunteers, “lone wolves”—a narrative that motivates them, and activates them. Traditional government controls and censorship are virtually useless. The extremists have to be met on their own communications battleground, but if we don’t understand the extremists’ tools and their narrative there is little hope that we can neutralize their message. Even then, there are no guarantees.

For the foreseeable future one of the central preoccupations of the global press, and certainly of the American press, is going to be the communications challenge presented by the “so-called Islamic State,” or ISIS, or ISIL, or Da'esh, the acronyms we use when we don't want to dignify this group with a name that makes it sound like a national entity.

And let’s make no mistake, the danger it poses is, first and foremost, one of communications. Its military victories have mostly been against hollow armies rife with corruption or weakened by other insurgencies. Its impact on global opinion, however, is based on its creative exploitation of media and myths, some old and some new, all wrapped up in an iconography that is deeply seductive for many young people in many different parts of the world.

I think all of us here can agree that we do not agree with almost anything that Da'esh represents, but we would be making a major mistake, as people concerned about the media, security and free speech, if we did not admit the agility and creativity of its messaging, which is much more supple and much more focused than most of the media when we are trying to tell something like the truth about the events that surround us.

If you want to understand one key aspect of the way Da'esh gets its message across, you would do well to spend a little time playing "Call of Duty," which has gamers enraptured all over the world.

If you then look at any of the highly produced films by Da'esh showing the actual murder of Western hostages, Syrian soldiers, Egyptian and other Christians, crucifixions, stonings, people thrown from towers and, most notably, the burning alive of a captured Jordanian pilot — then you, as a player of "Call of Duty," will find yourself in very familiar territory.

In “Call of Da'esh,” if you will, real people really are dying these gruesome deaths, but the video presentation has moved all that into a more accessible and, for a certain mindset, more acceptable dimension.

While Facebook, Twitter and YouTube certainly have been revolutionary communications tools, relatively few people in the press have understood how to exploit them effectively. And if we are going to talk about freedom of speech, we need to understand that these are the venues, much more than newspapers, or even television, that really count.

Journalists, I am sorry to say, are among the least imaginative users of social media. We employ social media these days to glean information because even the richest news organizations are reluctant to deploy people to war zones. Battlefields are expensive to cover.

But the most imaginative and effective users of social media as a tool to try to change the world are not doing what journalists do—grabbing bits of fact here and there to try to discover a truth—they are creating narratives to engage a following. And the most successful users of social media, at least in a political and potentially revolutionary sense, are those who create a narrative for a targeted audience that can be moved to action which then reinforces the narrative.

Barack Obama won the presidency of the United States this way in 2008. His campaign’s use of social media first engaged people who might only be vaguely interested in supporting him. Then it asked them to carry out specific acts, ringing specific doorbells to talk to people face to face to raise money and encourage voting. Then it asked people — young, enthusiastic people, for the most part — to record the results so Obama’s analysts and algorythms could gauge where their performance might be improved. And the narrative? The election of the first black president of the United States, a young man who said, “Yes, we can.”


I actually wrote in 2008 that these same kinds of tactics could be employed by terrorists. It's a question of tools, after all, not of ideology. At the time I was thinking of Osama bin Laden and Al Qaeda, who had first used CD-Roms and DVDs to spread their narrative, then satellite television, and who had just begun to experiment with YouTube.

From 2009 to 2011, we saw the power of narrative combined with social media and satellite to create popular uprisings in Iran, Tunisia, Egypt and much of the rest of the deeply frustrated Arab world. But their narrative was a short one—to gather, to protest, to try to bring down the government—with no real strategy for what might come after. I remember when I was in Tahrir Square in Egypt people talking about “crowd sourcing” the leadership of the revolution. Well, we know that doesn’t work. Militant groups with long histories of discipline and organization move into the vacuum and, more often than not, frustrate entirely the hopes of the free-thinking crowd on Facebook and Twitter.

In fact, coming full circle, we have to understand that the people who truly mastered the new media are those associated with the Al Qaeda spin-off that we’ve been calling Da’esh, because it understood its audiences—there are several; it knew how to develop narratives that they would feel compelling; and it has the leadership to continue an organized drive to create a new state in the Middle East that has goals far outside the region.

I want to focus here on the Da’esh narrative that has proved so seductive to young people in the West, because that is the one that Western governments have found so surprising.

In fact, today’s terrorists have certain common characteristics. I think of them as testosterone, narrative, and theater, or, if you will, TNT.

Testosterone because they are predominantly young men, often frustrated in their work lives and sex lives, who want an outlet for their energies. (This is true of many recruits in conventional armies. But one of the things Da’esh adds to the mix is the promise of wives and even slave girls.)

Narrative, which we keep coming back to, is absolutely central. Almost all terrorist recruits over the years, whether in the IRA, the Sendero Luminoso or Black September, have been convinced they were fighting to defend an oppressed people. They were not necessarily oppressed themselves, but they identified with those who were, and they see themselves in noble, even chivalric terms, like knights in shining armor coming to the rescue, which gives them the ability to justify, as knights often did, absolutely horrific acts. It is no accident that Al Qaeda’s core book of ideology by Ayman al Zawahiri bears the title Knights Under the Prophet’s Banner. Young men and women are inspired to answer their call of duty.

Theater? This is another area where social media have become so important. The recruits of modern terrorist organizations want to project themselves and their actions on the world stage, even if they are not going to be around on this earth to see the result. Social media have made this effect incalculably easier to achieve. And this is hardly limited to Islamic extremists. We just saw in a rural college in Oregon a horrendous mass murder by a young man who clearly thought he could write his name in history with the blood of his classmates. A few months earlier, another young man tried to do the same thing in Charleston, South Carolina, which is my home away from home in the United States.

Fifteen years ago, Bin Laden and his men spent a lot of time watching disaster movies like “Independence Day,” and they plotted their attacks to imitate that sort of iconography. Without huge spectaculars, they knew they could never command the kind of headlines and television time that they and their suicide troops wanted.

Ten years ago, when Abu Musab al Zarqawi was decapitating his enemies in Iraq, he had to depend on satellite news networks to show clips of the grotesque videotapes that preached about his sense of justice and were intended to horrify his enemies.

Terrorists of those earlier generations had to depend on others, even on the "mainstream media," to get their message out. But no longer.

Today, Da’esh has so many more tools at its disposal to sicken its enemies and glorify its knights in blood-spattered balaclavas, and not only the soft social media like Facebook and Twitter, but the hard core violent excitement of shared video games.

It isn’t so much that Da’esh produces its own version of “Grand Theft Auto,” although it has done that, it is the way it uses the imagery and iconography of video games to put its message across, blurring intentionally and cruelly the lines between the Xbox and the execution grounds of Raqqa. 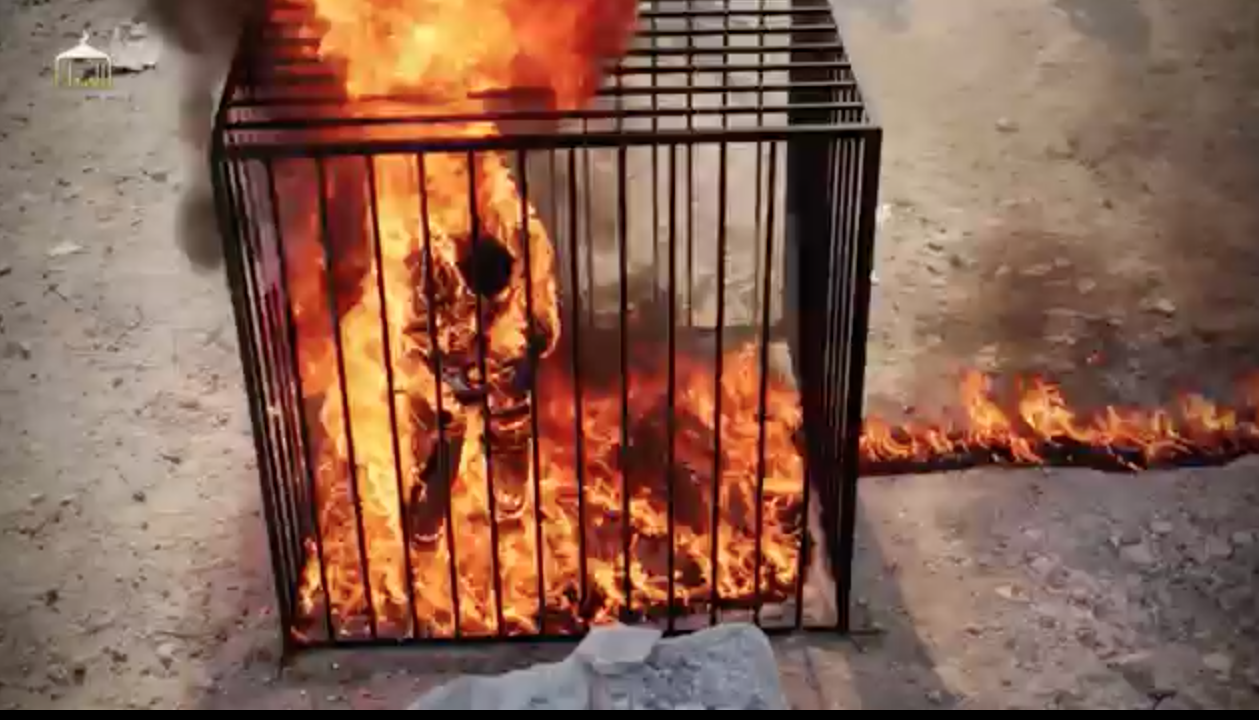 You may have noticed I have barely mentioned religion.

When we talk about Al Qaeda and Da’esh, there is often a lot of discussion about what the Qur’an says or does not say. And there is a lot of tweeting from this Surah or that one. But, of course, the Qur’an can say or not say just about anything these organizations want.

Do the Qur’an and the hadith warn against the worship of idols? Yes. So let’s destroy Nimrud and Palmyra. But have those same lines been interpreted by scholars for many centuries to warn against the portrayal of the human form? Absolutely. You can see the result in mosques all over the world. There are no representations of human beings.

Earlier radical movements, like the Ikhwan in Arabia, not only fought and died to keep television out of the Saudi kingdom in the 1960s for that reason, earlier on they smashed every mirror they could find in Jeddah and Mecca when they conquered those cities.

But Da’esh has no problem with the human form because it is so vital to its new media narrative—it won’t motivate many young men or women with calligraphy and arabesques—and Da’esh is a very practical organization.

There once was a notion that the people, on social media by the millions, or the billions, would offer correctives to the inhuman propaganda of monsters like the killers of Da’esh. But that simply is not the case—unless the people have a narrative that is more compelling. And they do not.

Neither do governments. Take a look at the deeply embarrassing efforts of the U.S. State Department’s @ThinkAgainTurnAway Twitter feed. That makes the point better than I can. 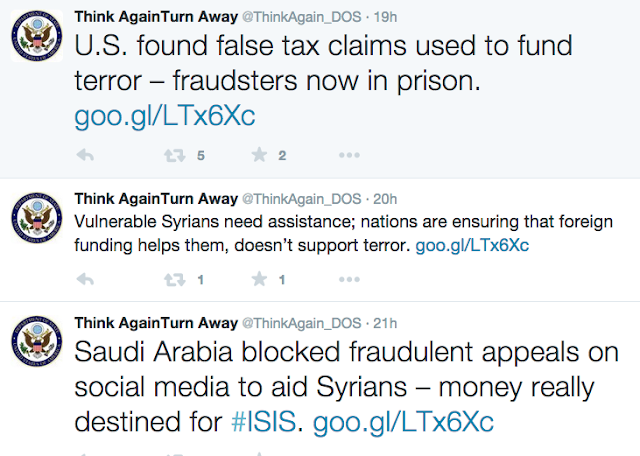 So, here’s my question for you—and it is not a rhetorical one:

Is there a narrative that we liberal-thinkers can use to counter the TNT that Da’esh offers its recruits? Maybe that is not exactly our duty, but it is something we have to think about in the name of humanity and, yes, whenver we talk about journalism, free speech and the tools of terror.

Posted by Christopher Dickey at 10:21 AM