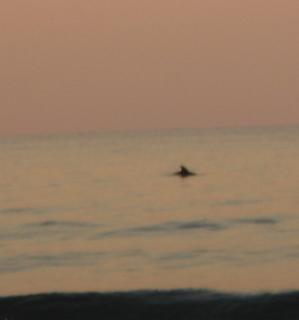 It may be the oddest tale to emerge from the aftermath of Hurricane Katrina. Armed dolphins, trained by the US military to shoot terrorists and pinpoint spies underwater, may be missing in the Gulf of Mexico.
Experts who have studied the US navy's cetacean training exercises claim the 36 mammals could be carrying 'toxic dart' guns. Divers and surfers risk attack, they claim, from a species considered to be among the planet's smartest. The US navy admits it has been training dolphins for military purposes, but has refused to confirm that any are missing....

In the mid-1980s, when the United States was supporting Iraq in its war on Iran, it wasn't allowed to base any troops on Kuwaiti or Saudi soil (much less in Iraq). So in a bizarre compromise, it built huge floating bases on barges offshore. Worried about the threat for Iranian frogmen, it trained porpoises as watchdogs (watchdolphins?). Years later I was told by someone familiar with those operations that these highly trained imported animals fell in love with some of the local fauna and took off. They or their offspring may still be out there somewhere ... - CD
Posted by Christopher Dickey at 8:29 AM