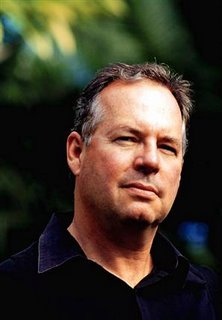 My friend Tom Masland wrote about war, famine, epidemics and, whenever he could, hope. Most of his career, or the best-known part of it, was spent in the combat zones of the Middle East and Africa taking risks and, at least once in Liberia, getting wounded. But what Tom loved about his job wasn’t the adrenaline, it was the experience of mysterious and exotic corners of life hidden away in exotic places. When he was in Cairo, I remember, he used to stay in a house-boat hotel. On the road, which is where we usually were, Tom and I ran into each other in Beirut in the time of kidnapping and Kuwait when its shipping was under siege during the “Tanker War.” Once we met in Brazzaville as Mobutu’s regime was collapsing across the Congo River in Kinshasa. Tom was hanging out with a diamond merchant or smuggler, I wasn’t entirely sure which, and I remember that was the first time I ever heard the term “blue ground,” which is the kind of earth where raw diamonds are found.
Tom’s family was tremendously important to him. We talked often about our fathers and about his wife, Gina, and his three sons, who were always too far away from wherever it was that we were. And Tom loved his music -- his jazz -- playing it and writing about it with great talent and quiet excitement. When Tom ended his assignment in Africa and moved back to the States last summer, he was looking forward to the time he’d be spending with those other loves and lives. And then, on a rainy night on the Upper West Side earlier this week, Tom was hit by the mirror of a passing SUV. As Tom fell, his head struck the pavement. On Thursday night he died in hospital.
Tom’s funeral is Sunday, and there will probably be a memorial service this summer, a pig roast on Maryland’s Eastern Shore, which he would have loved and which will give a lot of us a chance to celebrate his life. One of our friends says his ashes probably will be scattered on the Cheasapeake, which is fitting. But I cannot think of Tom without thinking of blue ground, and imagining him among the rough diamonds that are found there. - CD

Following are links to Newsweek’s tributes to Tom Masland:

By Rod Nordland
Newsweek
Nov. 7, 2005 issue - When our colleague Tom Masland stepped off the curb onto West End Avenue on the rainy night of Oct. 24, he had his funky little black bag over his left shoulder and his sax in a case in his right hand, and his life was about to end. He had just finished a gig at a Manhattan jazz club called Cleopatra's Needle, and was on his way to another performance downtown. In his day job, he had been a foreign correspondent and an editor for NEWSWEEK, occupations he had performed with such devotion and skill that many of us wouldn't know until he died how much else there was to him....
http://www.msnbc.msn.com/id/9862366/site/newsweek/

Q&A: Masland on Life as a Correspondent
http://www.msnbc.msn.com/id/9854851/site/newsweek/

Photos: On Assignment in Africa
http://www.msnbc.msn.com/id/9855000/site/newsweek/

This is the conclusion of the Q&A after Tom was wounded in Liberia:

You have a wife and three kids; do you worry about going into these kinds of situations?

I do it extremely sparingly; I do the minimum of this kind of thing. And if I am going to do something like this, I get in and out. I don't work like the photographers. They really expose themselves to a lot more danger than I do. Obviously they have to get a clear line of sight for stuff that is happening, but, to me, it is worth it to witness what is actually happening because I see things that I wouldn't otherwise, in terms of the way Charles Taylor's fighters were performing. I got stuff I wouldn't have had by just going to hospitals to see the wounded brought in or taking another tack on covering this offensive. I mean, the effect on civilians is probably the most compelling aspect of the story, because the mortaring of these refugees who are packed into the other side of town was quite awful. But, at the same time, I felt I would gain something from going to and passing by the front there. So I thought it was worth taking a small risk, and I try to be very careful about it. There is a way of doing dangerous things carefully.

Posted by Christopher Dickey at 11:12 AM