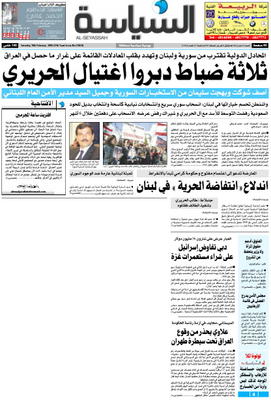 In the current edition of Newsweek, Kevin Peraino and I report that the strongest evidence in the Rafik Hariri murder case is to be found in the phone records analyzed by the United Nations commission investigating the bombing. What is not new is the thinly sourced accusation naming top Syrian officials. As the headlines on this February 19, 2005 issue of Al-Seyassah clearly demonstrate, within a week of the Valentine's Day bombing direct accusations were leveled against Asef Shawkat, Syrian intelligence chief and brother-in-law of President Bashar al-Assad, Gen. Bahjat Suleiman, who was head of internal security forces in the Syrian General Intelligence Directorate at the time; and Lebanon's Gen. Jamil Sayyed, who was Director of General Security in Beirut. (Thanks to my friend M.S. in Lebanon for passing along the scan of the front page.) Of course, there are other sensational names in the U.N. report, including and especially the Syrian president's brother, Maher al-Assad. But there's also a potential trap here, as UN-appointed investigator Detlev Mehlis apparently understands. The top Syrian figures in the report are implicated by only one anonymous witness, and Mehlis tried to get those names taken out of the copy released to the press. This has been depicted as an effort to protect the presumption of innocence. Perhaps. But it would also be protect Mehlis and the credibility of his report. If the testimony of that one witness cannot be substantiated and investigators have to dial back, then the whole inquiry could be discredited even though the documentary evidence makes the case against the Syrian intelligence services, as such, very clear indeed. - CD

Posted by Christopher Dickey at 1:05 PM