Axis of Weasels? France, Germany and the GWOT 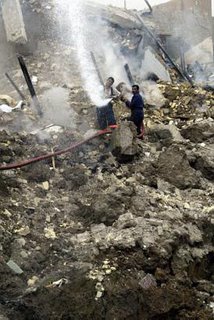 There is a public world of politicking and posturing, and a whole other world of intelligence cooperation, competition and trade-offs, as a couple of recent news items indicate. We’ve known for some time that French input has been vital to the “global war on terror” declared by President Bush, notwithstanding the vilification of those “cheese-eating surrender monkeys” in the right-wing press. Now we see the Germans not only offered good advice, trying to steer the Americans clear of a dubious Iraqi source known as “Curveball,” but once the war began, two German spies stayed behind in Baghdad to help the allies target air strikes:

BERLIN (Reuters) - German spies in Baghdad helped U.S. warplanes strike at least one target during the 2003 Iraq war despite Berlin's statements it was not involved in the conflict, German media reported on Thursday.
The Sueddeutsche Zeitung newspaper and NDR television said two agents of Germany's BND foreign intelligence agency remained in Iraq throughout the war, supplying U.S. counterparts with information.
"They gave us direct support. They gave us information for targeting," NDR quoted a former U.S. military official as saying in a preview of a programme to be broadcast later on Thursday.
He cited a April 7, 2003 air raid on a Baghdad suburb where Saddam Hussein was thought to be staying that had been conducted after a BND officer confirmed limousines were parked outside a building. At least 12 civilians were killed in the attack.
The allegation, if confirmed, would be an embarrassment to German Foreign Minister Frank-Walter Steinmeier, who as chief of staff to then Chancellor Gerhard Schroeder had oversight of the security services at the time.
Sueddeutsche Zeitung quoted unnamed security sources as saying approval of the BND's cooperation was a "political decision" taken by Schroeder's government after talks between the BND and the chancellery.
NDR said Steinmeier declined to be interviewed for the programme. It said the BND confirmed two agents remained in Iraq but denied they had been involved in helping to establish targets for bombing raids.
But the reports could help Chancellor Angela Merkel, who makes her first official visit to Washington later on Thursday on a mission to mend ties strained by Schroeder's opposition to the U.S.-led invasion of Iraq.
Sueddeutsche Zeitung said the BND spies had been based in French diplomatic quarters because Germany's embassy was closed on March 17, 2003 -- three days before the war started. France supported Germany's opposition to the war.
The newspaper said one of the tasks of the BND spies was to follow up a request by the United States to locate hospitals and embassies that should not be bombed.

Interestingly, some of the footage of Baghdad in the German television report was filmed by Michael Tucker, who made the stunning documentary "Gunner Palace," released last year and now available on DVD. --CD
Posted by Christopher Dickey at 10:03 AM