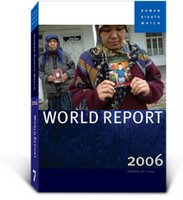 Human Rights Watch has issued its annual World Report, which is very tough on Washington, and with reason. Excerpts from the HRW press release:

The evidence showed that abusive interrogation cannot be reduced to the misdeeds of a few low-ranking soldiers, but was a conscious policy choice by senior U.S. government officials. The policy has hampered Washington’s ability to cajole or pressure other states into respecting international law. ...

“Fighting terrorism is central to the human rights cause,” said Kenneth Roth, executive director of Human Rights Watch. “But using illegal tactics against alleged terrorists is both wrong and counterproductive.”

U.S. partners such as Britain and Canada compounded the lack of human rights leadership by trying to undermine critical international protections. Britain sought to send suspects to governments likely to torture them based on meaningless assurances of good treatment. Canada sought to dilute a new treaty outlawing enforced disappearances. The European Union continued to subordinate human rights in its relationships with others deemed useful in fighting terrorism, such as Russia, China and Saudi Arabia.

Many countries – Uzbekistan, Russia and China among them – used the “war on terrorism” to attack their political opponents, branding them as “Islamic terrorists.”...

In his introductory essay to the World Report, Roth writes that it became clear in 2005 that U.S. mistreatment of detainees could not be reduced to a failure of training, discipline or oversight, or reduced to “a few bad apples,” but reflected a deliberate policy choice embraced by the top leadership.

Evidence of that deliberate policy included the threat by President George W. Bush to veto a bill opposing “cruel, inhuman and degrading treatment,” Roth writes, and Vice President Dick Cheney’s attempt to exempt the Central Intelligence Agency from the law. In addition, Attorney General Alberto Gonzales claimed that the United States can mistreat detainees so long as they are non-Americans held abroad, while CIA Director Porter Goss asserted that “waterboarding,” a torture method dating back to the Spanish Inquisition, was simply a “professional interrogation technique.”

“Responsibility for the use of torture and mistreatment can no longer credibly be passed off to misadventures by low-ranking soldiers on the nightshift,” said Roth. “The Bush administration must appoint a special prosecutor to examine these abuses, and Congress should set up an independent, bipartisan panel to investigate.”

Posted by Christopher Dickey at 9:00 AM