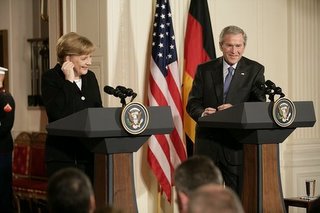 The story of German agents staying in Baghdad through the 2003 invasion and helping the U.S. military decide targets has mushroomed into a crisis of conscience, if not confidence, for the new government in Berlin, but President Bush was completely unaware of the issue when Angela Merkel paid a visit to the White House the other day. He made a few affable asides to lighten the burden of ignorance, as is his wont, including one about the way he confuses Iran and Iraq, then went on to the well-rehearsed line of the day. Shucks, no wonder the world loves him …

PRESIDENT BUSH: I have no idea about the latter. (Laughter.) You did say, secret intelligence, right? (Laughter.) I understand. I really -- the truth of the matter is, the Chancellor brought this up this morning. I had no idea what she was talking about. The first I heard of it was this morning, truthfully.

Secondly, the first part of your question was Iran.

PRESIDENT BUSH: Okay, good. Sometimes when you mix them up, it throws us off balance, you know? …

For more on the matter, a good place to watch is Der Spiegel's English-languate site: http://service.spiegel.de/cache/international .

Posted by Christopher Dickey at 10:09 AM