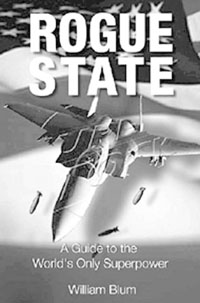 Browsing the Web, I see there's now a site devoted to "the book recommended by Osama bin Laden." This piece from The Washington Post just about sums up the man -- Blum -- his work, and his strange, momentary fame:

Twenty-four hours after Osama bin Laden told the world that the American people should read the work of a little-known Washington historian, William Blum was still adjusting.

Blum, who at 72 is accustomed to laboring in relative left-wing obscurity, checked his emotions and pronounced himself shocked and, well, pleased.

"This is almost as good as being an Oprah book," he said yesterday between telephone calls from the world media and bites of a bagel. "I'm glad." Overnight, his 2000 work, "Rogue State: A Guide to the World's Only Superpower," had become an Osama book.

In gray slacks, plaid shirt and black slippers, Blum padded around his one-bedroom apartment on Connecticut Avenue. A portrait of the Brooklyn Dodgers in the '50s hung on his kitchen wall. Bookshelves bowed under the weight of secret histories of the CIA. The cord on his prehistoric phone let him roam across the living room. He'd already done CNN and MSNBC. A guy from the New York Post knocked on the door to take pictures. The BBC rang, then Reuters and Pacifica Radio stations on both coasts....

Posted by Christopher Dickey at 8:48 PM