Syria: Khaddam on the "Mafia State" 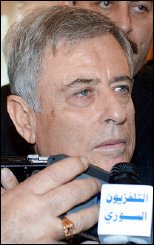 In one of his first public interviews since going into exile, a Syrian strongman discusses Ariel Sharon, the assassination of Rafik Hariri and Bashar Assad’s tight control over Damascus.

Jan. 5, 2006 - The cold blue eyes of Abdel Halim Khaddam shed no tears for Ariel Sharon this afternoon. For more three decades, Khaddam was the right-hand man of Syrian dictator Hafez Assad in open wars and diplomatic showdowns with Israel, often turning Lebanon into the main battleground. Sharon’s drive on Beirut in 1982 handed the Syrians a stunning defeat. But Syria slowly won its vengeance, supporting Hizbullah’s relentless campaign of terror and attrition—a war that has never really ended. “As far as Sharon is concerned, his death or disappearance will not change anything,” Khaddam told NEWSWEEK after the Israeli prime minister suffered a major stroke. “The difference between the Israeli factions is less one of substance than of degree. There will [at most] be a change in the map of Israeli political alliances.” He sees no chance of negotiations or peace agreements any time soon.

Yet this same Abdel Halim Khaddam, who continued to serve as Syria’s vice president after Bashar Assad inherited the top job from his father in June 2000, is now presenting himself as the man who might help replace the much-hated and increasingly isolated regime in Damascus. Last summer Khaddam left Syria for exile in France. Until last week, he said nothing in public. But in the last few days, from a luxurious townhouse in one of the most exclusive neighborhoods of Paris, Khaddam has gone public with vague plans to bring democracy to Syria and with specific accusations against the regime he once served.

For almost two hours this afternoon, Khaddam sketched a portrait of life at the top in what he freely discusses as “the mafia state” run out of Damascus. “There is a gathering of several levels of mafia,” he said, “The family mafia. The security mafia. The friends’ mafia.” And he presented a stunning narrative of the growing hatred Bashar Assad felt toward Lebanon’s billionaire former prime minister Rafik Hariri, who was blown up on the Beirut waterfront by a massive explosion last February.

In the aftermath of that killing, Lebanon erupted in protests against Syria’s long occupation. Under pressure from hundreds of thousands of people in the streets as well as from the governments of the United States, France and Saudi Arabia, Damascus was at last forced to withdraw all its troops from Lebanese territory under the terms of United Nations Security Council Resolution 1559, which Hariri had quietly supported. Some of the Lebanese security chiefs who served the Syrian occupation were jailed. A special U.N. investigation was launched, and two interim reports thus far have pointed the blame for the assassination at the Syrian regime. Yet Syria’s client president of Lebanon, Emile Lahoud, remains in office. (It was Bashar Assad’s insistence that Lahoud’s term be extended that first provoked the falling out with Prime Minister Hariri that led to his resignation in October 2004.) The voices of protest have been muted by the murder and maiming of prominent critics. The Syrian occupation has ended, but a reign of fear continues.

Following, with a few explanatory footnotes, are some excerpts from this afternoon’s conversation with Khaddam:

NEWSWEEK: Let’s go directly to the question of threats against Rafik Hariri. What did you hear exactly and when did you hear it and who did you hear it from?
Abdel Halim Khaddam: The threats started from several people. From President Bashar Assad. From Rustom Ghazaleh [the Syrian general who served as proconsul in Lebanon until the withdrawal]. And from other Lebanese officials who are closely connected to the Syrian government. These threats created a general atmosphere in Lebanon....
http://www.msnbc.msn.com/id/10728635/site/newsweek/

The interview was a long one and gives a pretty good sense of what Khaddam thinks he's doing these days, although there were no quotes quite as blunt as he was with Asharq Al-Awsat after all the predictable calumny heaped on him by the Assad clan:

Q: What are you current priorities? Do you want to reform the regime, reform it, or topple it?

A: This regime cannot be reformed so there is nothing left but to oust it.

Q: But how will you oust it?

This saga will continue, of course. But most of the people I talk to are betting with Assad, not Khaddam. They tell me that before Sharon fell ill, Bashar was thinking of making a peace play with Israel to shore up his international image. I believe my sources were told this at the highest levels in Damascus. I don't think such an initiative would have gone anywhere even if Bashar was serious, but it shows how much he's willing to maneuver. Meanwhile, it's hard to see what kind of constituency Khaddam thinks he has for his glorious return to a democratic Syria. The last response in my interview, about the Muslim Brothers, may be interesting in that regard. - CD

Posted by Christopher Dickey at 2:08 PM