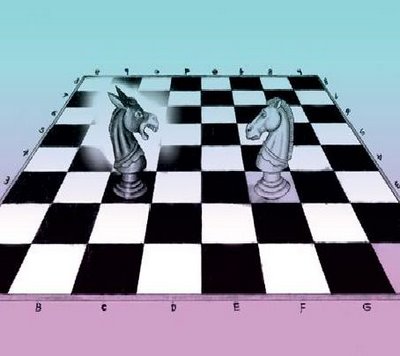 The government in Tehran is mighty sensitive about cartoons. First it fed the uproar over the Danish depictions of Mohammed, then it held its own Holocaust caricature festival. And now it has closed down the newspaper that published the above depiction of two chess pieces. The cartoon is seen as an allusion to Iranian President Mahmoud Ahmadinejad's remarks that the last time he spoke to the United Nations, a year ago, he felt himself surrounded by an aura. He's on his way back to speak again ... -- C.D.
Posted by Christopher Dickey at 2:57 PM No comments:

As often happens, the most salient fact was left to the end of yesterday's New York Times story about the torture -- or, interrogation -- of Abu Zubaydah. As I was once told by an interrogator from Lebanon, not a place known for friendly persuasion, "the basic problem with torture is that if someone is telling the truth ... how do you know?" What the Times story establishes, in a fashion so understated that the point could be missed, is that the CIA turned up the heat, and cold, and music, on Abu Zubaydah when it didn't believe his story that Jose Padilla was a fool, which he clearly was, and after it became convinced Aby Zubaydah was lying when he said he knew of no other 9/11-scale terror attack in the works. In both cases, he was telling the truth. But--how do you know?

This is the conclusion of the Times story:

In his early interviews, Mr. Zubaydah had revealed what turned out to be important information, identifying Khalid Shaikh Mohammed — from a photo on a hand-held computer — as the chief planner of the Sept. 11 attacks. Mr. Zubaydah also identified Jose Padilla, an American citizen who has been charged with terrorism-related crimes.

But Mr. Zubaydah dismissed Mr. Padilla as a maladroit extremist whose hope to construct a dirty bomb, using conventional explosives to disperse radioactive materials, was far-fetched. He told his questioners that Mr. Padilla was ignorant on the subject of nuclear physics and believed he could separate plutonium from nuclear material by rapidly swinging over his head a bucket filled with fissionable material.

Crucial aspects of what happened during Mr. Zubaydah’s interrogation are sharply disputed. Some former and current government officials briefed on the case, who were more closely allied with law enforcement, said Mr. Zubaydah cooperated with F.B.I. interviewers until the C.I.A. interrogation team arrived. They said that Mr. Zubaydah’s resistance began after the agency interrogators began using more stringent tactics.

Other officials, more closely tied to intelligence agencies, dismissed that account, saying that the C.I.A. had supervised all interviews with Mr. Zubaydah, including those in which F.B.I. agents asked questions. These officials said that he proved a wily adversary. “He was lying, and things were going nowhere,” one official briefed on the matter said of the early interviews. “It was clear that he had information about an imminent attack and time was of the essence.”

Several officials said the belief that Mr. Zubaydah might have possessed critical information about a coming terrorist operation figured significantly in the decision to employ tougher tactics, even though it later became apparent he had no such knowledge.

“As the president has made clear, the fact of the matter is that Abu Zubaydah was defiant and evasive until the approved procedures were used,” one government official said. “He soon began to provide information on key Al Qaeda operators to help us find and capture those responsible for the 9/11 attacks.”

This official added, “When you are concerned that a hard-core terrorist has information about an imminent threat that could put innocent lives at risk, rapport-building and stroking aren’t the top things on your agenda.”

Posted by Christopher Dickey at 2:27 PM No comments: