These articles are updates on the effort to mount a nonviolent protest march, which I wrote about in last week's Shadowland column, "What would Jesus do in Gaza?" :


EGYPT: 100 activists depart for Gaza, 1300 others are not allowed to make trip
Los Angeles Times (blog)
"For anyone to claim that Egypt was doing us a favor by offering to allow
100 GFM members to go is asinine and baseless," said Roqayah Shams El Din,
...
<http://latimesblogs.latimes.com/babylonbeyond/2009/12/egypt-hundred-activists-depart-to-gaza-1300-others-denied-trip.html>


Egypt lets some demonstrators into Gaza
Baltimore Sun (blog)
Egypt has agreed to allow 100 pro-Palestinian demonstrators into blockaded
Gaza, but they do not appear to include any of the Marylanders who were
planning ...
<http://weblogs.baltimoresun.com/news/faith/2009/12/gaza_freedom_march.html>


Egypt agrees to buy up to 24 F-16s
Fort Worth Star Telegram
The US government signed an agreement with Egypt on Dec. 24 to sell the
planes to the African nation, and the Pentagon had notified Congress of the
possible ...
<http://www.star-telegram.com/804/story/1858757.html>
See all stories on this topic:
<http://news.google.com/news/story?ncl=http://www.star-telegram.com/804/story/1858757.html&hl=en>
Posted by Christopher Dickey at 11:56 PM No comments:

I had forgotten I filled out this form last year. And, looking back, some of the responses are more interesting than I remembered.

The ongoing dialogue between Lt. Col. Edward Ledford, writing from Afghanistan, and poet Carol Muske-Dukes on The Huffington Post inspired me to dig up three long essays I wrote about the works of my father, the poet James Dickey, and questions of war and foreign policy. If you happen to have spare time for reading over the holidays, they may be of some interest:
"Firebombings: From My Father's Wars to Mine," delivered at Clemson University, 2003:
www.strom.clemson.edu/events/calhoun/guests/dickey.pdf
"The Sharks in the Parlor: Fact, Fiction and Foreign Policy," delivered at Clemson University, 2004: http://www.clemson.edu/caah/cedp/cudp/scr/dickey/dickey_christopher.pdf
"War and Deliverance," published by Newsweek Online in 2007 based on a speech at the University of South Alabama, 2006: http://www.newsweek.com/id/53461
Posted by Christopher Dickey at 12:48 PM No comments:

FBI on the Jihadists of Georgia

It was a tip from a foreign intelligence partner that set the case in motion.

Now, following their convictions in federal court earlier this year and sentencings this week, they are each headed to prison for quite some time.

In the summer of 2005, we learned that a central player in a terrorism investigation in another country was in e-mail contact with someone in the Atlanta area.

With appropriate court orders, our Joint Terrorism Task Force in Atlanta quickly tracked down who that person was. It was a 19-year-old American named Ehsanul Sadequee, who was also exchanging regular e-mails, we discovered, with a 20-year-old Georgia Tech student named Syed Haris Ahmed.

Initially, our investigation—code-named “Northern Exposure”—was focused on finding out what the two young men were up to and why Sadequee was trading e-mails with a terrorism suspect. We began both electronic and physical surveillance on each one and began tracking their financial and travel patterns with the help of partner agencies in the U.S.

We soon uncovered two key facts. One, both Sadequee and Ahmed were in touch with terrorist suspects in nearly a dozen nations around the world. And two, a great deal of this contact was via the Internet.

With our new post-9/11 intelligence-driven mindset, the last thing we wanted to do at that point was to rush in and make arrests. It was far more important to tease out information on all the players who might be connected to Sadequee and Ahmed, to paint a larger picture of this online and offline network of extremists, and to share that information with our national and international colleagues.

As discussed in part one of our story, our investigation revealed that Sadequee and Ahmed ended up casing U.S. targets, supporting and sharing information with terrorists around the globe, and traveling overseas to act on their desire to wage violent jihad. Some of our intelligence came from our overseas partners, who discovered links from their terrorism suspects to Sadequee and Ahmed. And the FBI shared its intelligence on terror suspects uncovered during our investigation of the two Atlanta extremists.

In March 2006, we approached Ahmed to see if he would cooperate in the case. Though he tried to deny his illegal activities, Ahmed made incriminating statements and secretly contacted Sadequee to warn him of our investigation. We arrested Ahmed soon after, and Sadequee was arrested in Bangladesh the following month. Both were convicted in separate trials this year, and sentenced on December 14.

A satisfying end to the case, but this investigation had a far broader and more significant outcome: thanks to unprecedented global cooperation, governments in nearly a dozen nations have arrested more than 40 individuals and disrupted an untold number of terror plots.

“Sadequee and Ahmed never pulled a trigger or set off a bomb, but they were making plans and working with known terrorists worldwide,” says Atlanta Special Agent in Charge Gregory Jones. “By using an intel-driven approach, we not only stopped these guys from doing harm, we took out a larger web of extremists.”

In the end, a network of terrorists was brought down by another network: a determined group of law enforcement and intelligence agencies from around the world working in unison to share information, compare evidence, and disrupt terrorist plots.

Posted by Christopher Dickey at 4:58 PM No comments:

As widespread fraud in the Afghanistan presidential election was becoming clear three months ago, the No. 2 United Nations official in the country, the American Peter W. Galbraith, proposed enlisting the White House in a plan to replace the Afghan president, Hamid Karzai, according to two senior United Nations officials.... http://www.nytimes.com/2009/12/17/world/asia/17galbraith.html

NOTE: I've known Peter for, oh, almost 20 years, crossing paths with him in Abu Dhabi, Zagreb and elsewhere, and while we don't always agree, I've always admired his guts and his determination to stand up for what he thinks is the right policy, even if it goes against -- or slides around -- official policy. He was a passionate supporter of the Kurds before and after the 1991 gulf war, and then after the fall of Saddam a dozen years later. As US ambassador to Croatia in the mid-1990s, he quietly encouraged Iranian arms shipments to the Bosnians, much to the consternation of the CIA station chief. His actions helped bring that long brutal Balkan war, at last, to an end. In recent weeks there have been allegations that Peter profited from his relations with the Kurds by getting a share in a major -- and controversial -- deal with a Norwegian company. But at the time he was acting as private citizen, and, as he told the Times, somewhat archly,"while I may have had interests, I see no conflict."
Peter may not always be a good diplomat, but he's almost always good copy.
Posted by Christopher Dickey at 7:45 AM No comments:

Ever since "Capote" producer Caroline Baron created Filmaid International from scratch during the Kosovo war, I have watched in amazement at the enormous amount the organization has been able to accomplish with very limited resources. From the beginning I found it startling, as well, that Hollywood, always so anxious to be seen to be doing good, failed to understand that its most valuable gift to refugees around the world would be to offer them some psychological escape from the relentless dreariness of life in the camps. These various clips from YouTube give an idea of what's been done in two camps in Kenya. Some are professionally produced, some are put together by the increasingly skilled refugee filmmakers themselves. But my favorite is this little 28-second cell-phone clip of children in Kakuma camp dancing for the sheer joy of it before an outdoor screening -- which most likely was "The Wizard of Oz."


The elegant official Filmaid trailer, explaining what it's all about:


The link to it is:
http://www.youtube.com/watch?v=5ynmqtVQbFo


A compilation of brief segments from public service announcements produced by and for the refugees in Dadaab and Kakuma. Note that there is a very heavy emphasis on issues directly affecting women.
http://www.youtube.com/watch?v=yXHucoiHrlQ

An interview with my good friend Caroline Baron, founder of Filmaid International.
http://www.youtube.com/watch?v=f5ucGEAJm_w&NR=1

"About Kakuma" was created by and for the Filmaid staff there to show what they're doing, and who's doing it.
http://www.youtube.com/watch?v=7FwRwV313kw&NR=1

A professionally produced overview of Filmaid activity in Kakuma.
http://www.youtube.com/watch?v=d6FMPcFQaRQ&feature=rec-fresh+div-r-7-HM

Again, this is the link to that 28-second phone-movie clip of children dancing before a screening at Kakuma.
http://www.youtube.com/watch?v=Tme-w6Iytfc&NR=1

A "Kakuma Doggs" Filmaid film about an abandoned boy.
http://www.youtube.com/watch?v=KC12nNNXrGY&NR=1

Another Kakuma Doggs Filmaid movie with performance and production in the hands of the students. This one is about conflict resolution when brothers turn against each other over who controls the family store in Kakuma after their father dies and the arguments become violent.
http://www.youtube.com/watch?v=-BUMEHCNGuk&feature=related
Posted by Christopher Dickey at 9:55 AM No comments:

This is part two of an interesting program hosted by Marwan Bishara that aired in October with Marc Sageman, Larry Wright, Robert Pape and Gen. Richard Myers. One of the cut segments that starts about after about 17:10 minutes includes clips from a brief interview with me. For the record, while I certainly believe that preventive action by police raises complicated issues, I do not agree with the other people interviewed who suggest that the conviction rate should be the measure of success. The absence of attacks should be the measure of success. - CD
Posted by Christopher Dickey at 9:04 AM No comments: 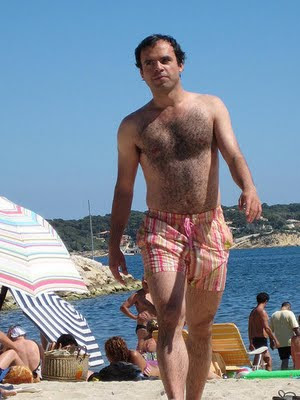 Shadowland: The Blogfather and the Spy, 3 December 2009
The "secret witness" in Tehran's show trials may be the man who started Iran's blogging revolution. http://www.newsweek.com/id/225506

These pictures of Hossein Derakhshan from his Facebook pages give a good sense of the mercurial Iranian blogger in happier times.

It's high time that "Hoder" was set free. 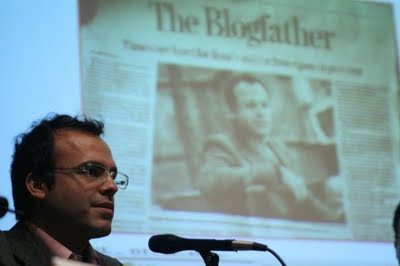 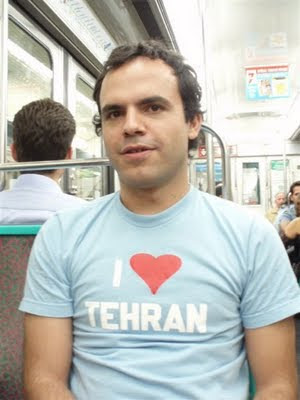 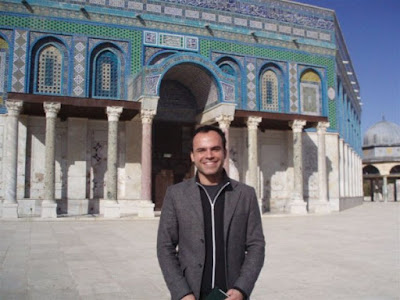 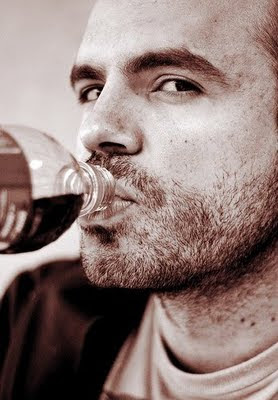 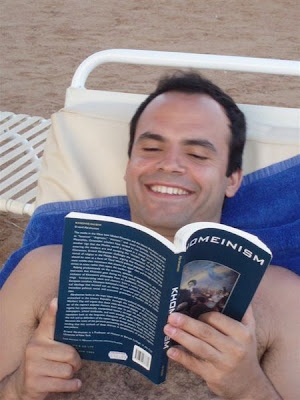 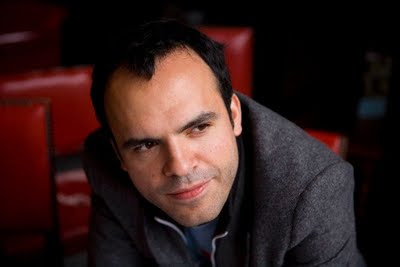 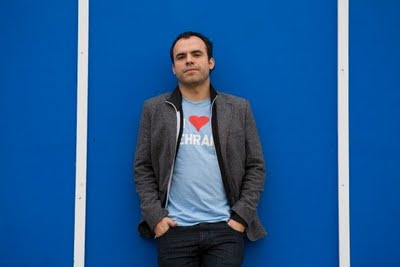 Posted by Christopher Dickey at 9:02 AM No comments: