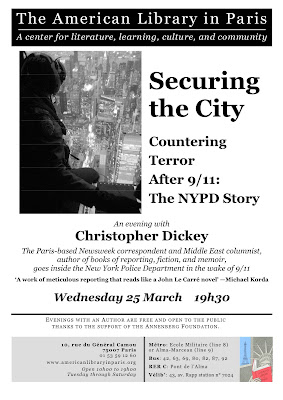 Posted by Christopher Dickey at 12:33 PM No comments:

Lower Manhattan: The Eyes Have It

Modeled on London’s 10,000 camera system, called the "Ring of Steel," the Lower Manhattan Security Initiative (LMSI) – which has attained the same nickname – will consist of 3,000 networked cameras monitoring 1.7 miles of area south of Canal Street. One-third of the cameras will be city-owned, with the other two-thirds belonging to private businesses, termed “stakeholders” in the guidelines. Automated license plate readers and environmental sensors will also provide data to the police. The cameras will be monitored by officers at a coordination center on Broadway, which opened last November. The system is expected to cost $89 in local and federal funds.

To allay concerns about the intrusiveness of this network, the NYPD last month made public a preliminary version of the Public Security Privacy Guidelines for the Domain Awareness System, the program that will handle all data gathered by Lower Manhattan Security Initiative cameras. Comments on the draft will be accepted through next Wed., March 26 (and may be e-mailed to oct@nypd.org or mailed to New York City Police Department, Attention: Counterterrorism Bureau, 1 Police Plaza, New York, NY 10038).

According to the draft guidelines, the data management program is a counterterrorism measure intended to deter future attacks, detect “pre-operational” terrorist activity, increase “domain awareness” for non-police entities involved in the program and provide an infrastructure for the “integration of new security technology.”

The system will gather and store information from cameras, automatic license plate readers, environmental sensors and other unspecified technology. Video data will be erased after a 30 day “pre-archival period,” unless footage is being used in law enforcement investigations. License plate data and “metadata,” a broadly-defined category of information that will “increase the usefulness” of footage or sensory data gathered, will be retained for five years. Environmental data may be retained indefinitely.

Despite the NYPD’s assurance that data from the Domain Awareness System will be strictly regulated and the cameras will not be used to target innocent citizens, surveillance skeptics including the New York Civil Liberties Union remain unconvinced about the department’s commitment to privacy.

“They purport to be nothing more than internal NYPD policy. There are no actual restrictions here,” NYCLU associate legal director Christopher Dunn said of the privacy guidelines issued by the police department. Dunn, who is lead counsel on the NYCLU’s 2008 lawsuit to obtain information about the Ring of Steel, says the police department broadly defines the data it will retain: “Ninety-nine point nine percent of what they collect will be lawful activity.”

Deputy Commissioner for Public Information Paul Browne did not respond to requests for further comment on the LMSI project and its privacy guidelines.

City Councilman Alan Gerson, whose lower Manhattan district includes the designated area, says he views the NYPD's guidelines as a first step toward ensuring that video surveillance is done properly. "It's important that this not be allowed to evolve into a general surveillance system, but rather be used to identify and prevent real threats," Gerson said.

He plans to introduce legislation in the next few months that would codify regulations and restrictions for video surveillance in the five boroughs. Asserting council oversight over the practices of the police department – rather than leaving surveillance policy solely in the hands of the Bloomberg administration – is another reason Gerson is pursuing this issue. "We need to maintain these checks and balances," he said.... (more)

Posted by Christopher Dickey at 8:45 AM No comments:

The talk at the Smithsonian early last month was shown on C-Span on Saturday, March 7, but I don't yet have a link to it on the Web. If you come across one, please let me know.

Video: KHOU Houston report on terrorism in Texas, including an interview with Christopher Dickey: http://www.khou.com/video/index.html?nvid=337668&shu=1

What It Takes to Defeat Terrorists ... Really.


"Know Your Terrorist"/Christopher Dickey on "The Paula Gordon Show: Conversations with

Atlanta, GA/March 5, 2009 -- What's the secret of security and fighting terrorism in New York City, and in fact in most of the big cities in the United States? "The American Dream," reports Christopher Dickey.

And the answer is?

“Effective intelligence work, maybe some covert action, a lot of diplomacy and by holding on to the American Dream. What’s needed is the combination of law enforcement and intelligence gathering. That's how you fight terrorism. To have couched the actions of a handful of testosterone driven malcontents in a framework of a clash of civilizations is plainly nuts.

“You don't want to sound kind of airy-fairy talking about this, because you’ve got bad guys with guns and bombs and doing all kinds of crazy stuff out there. But the truth is, the best thing you’ve got going for you is the community that rejects those kinds of actions.

“If you look at the list of the top ten safest cities, eight of them are where there are high proportions of first generation immigrants. When people come to the United States, they come to build their futures. They come because they buy into the Dream.

“It’s really an immigrant and ethnic dream. You can be Hindu, you can be Muslim, you can be Jewish, you can be Catholic, you can be an Atheist. (These immigrants) want to keep things quiet. When you look at that, you start to understand that safety is about the way people feel in the society, about the possibilities it gives them.

“If there's a problem with immigration, and there is, it’s when you have second and third generation children of immigrants who didn't come of their own free will, (who) feel cut off from the possibilities of the society.

“What happened in March of 2003 is that basically we had won the war against the people who carried out 9/11. As of 2003, the Bush Administration might have said, ‘We've won and we're going to keep after Bin Laden and then we're going to get on to the business with living our lives.’

“But they didn't, of course. It was just a stunning mistake. It did nothing except create more hatred of America. It broadened the pool from which terrorists draw their recruits, made it harder to get intelligence, and ultimately bogged the United States down in a war that costs about 2 and a half billion dollars a week, the sole purpose of (which) is essentially to keep Americans in a country where they're not wanted.”

The same realities apply to homegrown criminals like the Unabomber, he says.

“Why do we think that (terrorist acts are) something unique to Muslims? It’s commonplace. There are a lot of nuts running around and some of them have apocalyptic visions of themselves.”

Christopher Dickey, reporter and author. An award-winning Newsweek reporter, Mr. Dickey is their Paris Bureau Chief and Middle East Regional Editor. Previously, he was Cairo Bureau Chief and Central America Bureau Chief for the Washington Post. Mr. Dickey, author of Securing the City: Inside America’s Best Counterterror Force -- the NYPD, also writes the weekly “Shadowland” column on counterterrorism, espionage and the Middle East for Newsweek online. His five other books include Summer of Deliverance. He lives in Paris and New York City.

Securing the City: Inside the World’s Best Counterterror Force, the NYPD is published by Simon and Schuster.


A decade ago, former deputy director of the FBI Danny Coulson first pointed out to us the important distinction between the role of police and that of the military. He also argued that treating terrorists as criminals rather than members of some amorphous army greatly reduces the public relations efficacy of their crimes.

Mia Bloom (Dying to Kill) says that it is precisely the PR effect of suicide bombings which sustains their use.

In How Israel Lost, Richard Ben Cramer agrees with Mr. Dickey's point that military occupation of a land along with accompanying humiliation of its people is guaranteed to stoke the flames of terrorism.

In The Terror Dream, Susan Faludi says that, rather than dealing with the reality of terrorism as Mr. Dickey suggests, American media and much of the political and chattering classes chose to respond to 9/11 by engaging in magical thinking based or ersatz American myths

Former Ambassador Peter Galbraith supports Mr. Dickey's view that the American invasion and occupation of Iraq has served as an excellent tool for recruiting new terrorists.

Tim Weiner has documented the ongoing intelligence failures of the CIA in Legacy of Ashes.
Posted by Christopher Dickey at 10:48 PM No comments: