Check out The Next Wonder of the World by Rem Koolhaas; An Arab Spring Success Story (maybe); plus audio on the BBC and video on France 24

Newsweek Magazine: Architect Rem Koolhaas and the Next World Wonder, 16 July 2012
When the Olympics hits the airwaves, Beijing will be broadcasting them from this new $900 million architectural masterpiece.
http://www.thedailybeast.com/newsweek/2012/07/15/architect-rem-koolhaas-and-the-next-world-wonder.html

Video: France 24: The World This Week - 13 July 2012
The UK tabloid press sizes up France's new president and focuses on his height (1m70) but the joke could be on François Hollande's hosts: when the French leader warns of a multi-speed Europe, does it mean an eventual divorce between Britain and Europe?
f24.my/ODfEsC


Posted by Christopher Dickey at 4:13 PM No comments:

Check out Newsweek International: Sky Cities: Imagining the Airport of the Future as Destination, 9 July 2012

(This is the first of three travel and design pieces I'll be writing this month, along with the usual coverage of politics, conflict, pestilence...)


Posted by Christopher Dickey at 4:12 PM No comments:

French soldiers and their missions 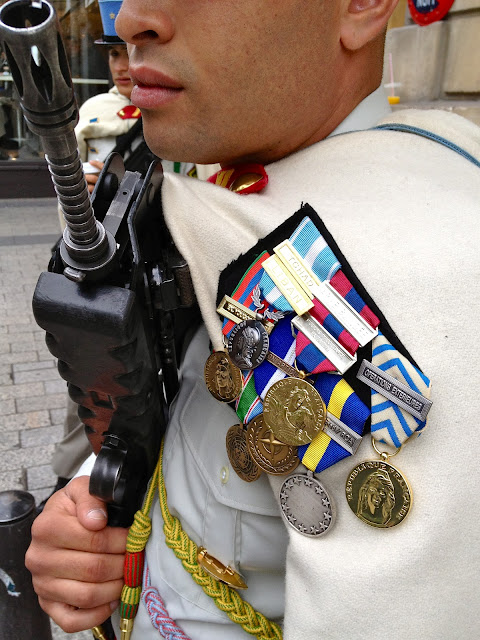 French cavalryman on the Champs Elysées yesterday morning before the Bastille Day Parade in Paris, France. The medals give an idea how much expeditionary work a young French soldier is likely to see: Tchad (Chad), Liban (Lebanon), Arme Blindée (Armor) and Missions d’Assistance Extérieure (Foreign Assistance Mission), Operations Exterieures (Foreign Operations), Ex.Yougoslavie (Ex-Yugoslavia), Tchad / RCA (Chad / CAR [Central African Republic]). And it seems his unit is not one of those that has served in Afghanistan.

For more in this series visit Rues de Paradis.
Posted by Christopher Dickey at 9:18 AM No comments: