Imam Feisal Abdul Rauf has posted an interesting analysis on the OnFaith blog:

Learning from the Danish cartoon crisis of 2006 and the Sudanese teddy bear debacle of 2007, the Dutch are preparing to preempt a Geert Wilders-inflicted pandemic of 2008. This preemptive approach seems to be paying off; reversing what looked like an inevitable widening of rifts between the West and the Muslim World. The Netherlands now know that outbreaks of xenophobia must be treated as any other pandemic threatening a population. In preparation for the outbreak, an early warning system must be established and at onset, one must quickly quarantine the ideological disease before it spreads further. With Wilders, the need for preparedness was great.

Geert Wilders, leader of the right-wing, anti-Muslim Freedom Party, of which there are only nine members in the 150-seat Dutch lower house, had long threatened to release a film exhibiting, in his words, "the violent and fascist elements of the Muslim faith". This saber-rattling was not new. On previous occasions, Wilders equated the Qur'an with Mein Kampf and called for both books to be banned (a proposal roundly rejected by parliament). Additionally, Wilders' suggestion that the 1 million Muslims living in the Netherlands renounce aspects of their faith or leave country was also dispelled as nonsensical. This new film, however, was going to trump polemical precedent and the Muslim world was readying for the worst.

This is where the Dutch did right, by discernibly developing mechanisms to dampen down disease spread. With other European Union countries quickly diversifying religiously and ethnically, they too will no doubt trip up on similar potential points of ideological contention. Thus, this model deserves dutiful review and, ultimately, duplication. If the saying "an ounce of prevention equals a pound cure" holds true, the Danish cartoon crisis should shock anyone into an early-warning convert. The potential social, political and financial costs are simply too great to ignore. And the Dutch, as we will see below, understood that. ... (more)
Posted by Christopher Dickey at 2:37 PM No comments:

Postcards from the Edge...And Hitler's Stargazer 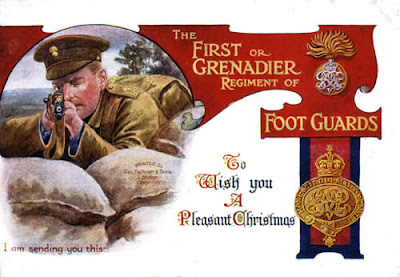 The British National Archives at Kew come up with surprising finds of one sort or another in every monthly bulletin. The latest offers postcards and photographs from World War I, including this charming wish for "A Pleasant Christmas."

There's also an interesting collection of papers about the astrologer hired by the British government to conduct stargazing psyops against Hitler, who was a great believer in such things: 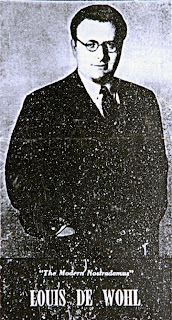 De Wohl was a Hungarian astrologer and author who came to the United Kingdom in 1935 and spent much of the war in official employment on propaganda work for the Special Operations Executive (SOE), the Political Warfare Executive (PWE) and other agencies. The work was based on the assumption that Hitler was heavily influenced by his own astrologer, so that by employing their own prominent astrologer, the British could sway his thinking.

Posted by Christopher Dickey at 6:51 PM No comments:

Just came across this very sharp, very funny take on fake memoirs:
Where Am I Now When I Need Me: The True Story
Posted by Christopher Dickey at 4:50 PM No comments:

I just came across this YouTube posting from two years ago. Not much has changed:

Posted by Christopher Dickey at 8:46 AM No comments:

Nasrin Alavi, author of We Are Iran, has been back in her homeland, and she's written a long, interesting report for New Internationalist about her experiences in a country where fortunes are being made, Rolexes are back in the shop windows, and a population that is politically helpless feels ever more apathetic. An excerpt:

I am amongst a group of young women at a bustling Tehran restaurant who are celebrating their university graduations. These girls are the sort of young people that writers (myself included) often enthuse about: the educated, burgeoning children of the Iranian Revolution, with enlightened ideals, at odds with their hardline politicians. Yet these students don’t appear to be fully conscious of the outstanding UN sanctions over Iran’s nuclear programme. ‘We’ve been too busy cramming for exams, I can’t even remember the last time I read a newspaper,’ is one typical response. Still, even if she had picked up a newspaper, she would have had to read between the lines to decipher such news. Iran’s National Security Council has for some time banned any negative reporting of outside pressure over its nuclear programme. This uninformed, passive, politically disengaged outlook is rather typical of most Iranians I have talked to in recent months, rich or poor.

Yet like most Iranians these young women openly grumble about the rules and regulations; the lack of jobs, inflation, poverty and corruption. They mock Iran’s President Mahmoud Ahmadinejad and unashamedly breach the strict guidelines by wearing their compulsory headscarves way back over their head to reveal as much (illicit) hair as possible. This is especially daring as Iran has endured an intensive summer crusade to banish widespread violation of the Islamic dress codes that has seen many cautioned and arrested. Shadi proudly shows off a personally compiled list of all the major shopping centres and thoroughfares in Tehran on her possible daily route where police cars and vans are positioned. Her approach is to avoid going through these areas. The salient mood here seems to be to outmanoeuvre and circumvent rather than face confrontation. ... (more)

Posted by Christopher Dickey at 10:18 AM No comments:

Shutting Down the Satellites?

Al-Jazeera's Marwan Bishara appears on CNN to talk about efforts by the Arab League to rein in satellite broadcasts. Of course, Lebanon and Qatar refused to sign so ... and what expectations did we have from any of the rest?
http://edition.cnn.com/video/#/video/international/2008/02/29/ic.arab.media.row.bk.c.cnn
Posted by Christopher Dickey at 9:59 AM No comments: