Came across this interesting remark by Col. Michael J. Meese, one of Gen. David Petraeus's "Dream Team" in Iraq, interviewed for the Council on Foreign Relations Web site:

General Petraeus doesn’t want to paint this better or worse than it is. December was the height of the ethno-sectarian violence. So we’re comparing the worst possible month with the current situation, and it has dropped dramatically, which was the intent of the surge, to stop the over-all killings, and ethno-sectarian violence is down even more. In other words, all civilian casualties and all civilian deaths are down 17 percent and 48 percent, respectively.

Readers of The Shadowland Journal entry, "The Surge, the Sun and the Sand," or of Newsweek International's "Why It Matters" blog will recall that these kinds of changes tend to be cyclical and heavily affected by the weather. You'd think with all the "metrics" that Petraeus has pulled together, he'd know that. Actually, I think he does. He just figures you don't. - C.S.
Posted by Christopher Dickey at 4:07 PM 3 comments:

It seems Big Brother was watching George Orwell. The relevant documents from MI5 and MI6 have just been released by the British National Archives . Click through and you can download very good copies of the originals for free. 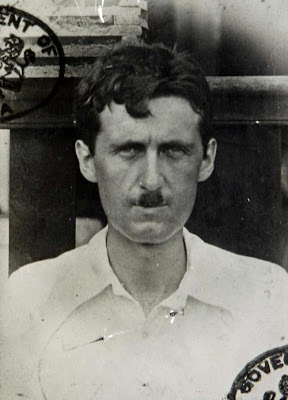 This slim Security Service file on journalist and author Eric Blair, alias George Orwell, shows that while his left-wing views attracted the Service´s attention, no action was taken against him. It is clear, however, that he continued to arouse suspicions, particularly with the police, that he might be a Communist. The file reveals that the Service took action to counter these views.

The file essentially consists of reports of Orwell´s activities between 1929 and his death in 1950. It gives some insight into Orwell's financial position while in Paris and includes a 1929 MI6 report to the Special Branch on his activities there, and various subsequent Special Branch reports. One of these by police Sergeant Ewing, from January 1942 (serial 7a), asserts that: "This man has advanced Communist views, and several of his Indian friends say that they have often seen him at Communist meetings. He dresses in a bohemian fashion both at his office and in his leisure hours." A Service officer rang Ewing´s Inspector to challenge this view (minute 9). Wartime enquiries as to Orwell and his wife´s suitability for employment as a journalist and with the Ministry of Food were all approved. It is of some interest to note the part Orwell´s answers to a published Left magazine survey had in convincing the Service that Orwell should not be considered a Communist. The file includes a copy of Orwell´s passport papers and original passport photographs.

Posted by Christopher Dickey at 7:10 PM No comments:

Bits and pieces about the great Arms Bazaar scandal continued to surface in late August and the beginning of this month. But perhaps because of the timing, just before and during Labor Day weekend, the story seems to be slow gathering critical mass. It's been overshadowed by speculation about the upcoming report on the surge by Gen. David Petraeus. Yet the details of this case must raise questions, precisely, about Petraeus's earlier record managing what was supposed to be the critical job of training Iraqi military and security forces. Much of the alleged corruption took place on his watch. If he was ignorant of it, and I presume he was, does that absolve him of responsibility?:

WASHINGTON, Aug. 30 — An American-owned company operating from Kuwait paid hundreds of thousands of dollars in bribes to American contracting officers in efforts to win more than $11 million in contracts, the government says in court documents.

The Army last month suspended the company, Lee Dynamics International, from doing business with the government, and the case now appears to be at the center of a contracting fraud scandal that prompted Defense Secretary Robert M. Gates to dispatch the Pentagon inspector general to Iraq to investigate.

Court documents filed in the case say the Army took action because the company was suspected of paying hundreds of thousands in bribes to Army officers to secure contracts to build, operate and maintain warehouses in Iraq that stored weapons, uniforms, vehicles and other matériel for Iraqi forces in 2004 and 2005.

A lawyer for the company denied the accusations.

One of the officers, Maj. Gloria D. Davis, a contracting official in Kuwait, shot and killed herself in Baghdad in December 2006. Government officials say the suicide occurred a day after she admitted to an Army investigator that she had accepted at least $225,000 in bribes from the company. The United States has begun proceedings to seize Major Davis’s assets, a move her heirs are contesting.

[There is an interesting discrepancy in the court documents which the Times does not mention. The affidavit of CID Investigator Moreland says he interviewed Davis on Dec. 20, 2006, which is strange, since she killed herself on Dec. 12, 2006. Lee Dynamics' lawyers were unable to use this to get the injunction they wanted, however, and their case was dismissed. ]

The company has been known as American Logistics Services.

Details of the case have come to light because the company contested the Army’s decision, on July 9, to suspend it from obtaining contracts. That forced the government to disclose details in court papers, including a seven-page statement by an Army investigator.

Howell Roger Riggs, a lawyer or the company, denied the accusations and said the company was appealing to have the suspension lifted. Mr. Riggs acknowledged that the company was under a Justice Department investigation but said that no charges had been filed against the company or its officials.

“This is based solely on a declaration that is unsubstantiated and uncorroborated,” Mr. Riggs said in a telephone interview. “If they want to come forward with hard evidence and accusations, we’ll deal with it at that time.”

The case is now part of a broader investigation in which the Army has a high-level team reviewing 18,000 contracts valued at more than $3 billion that the Kuwait office has awarded over four years.

The Army has suspended 22 companies and individuals, at least temporarily, from pursuing government work because of contract fraud investigations in Iraq, Kuwait and Afghanistan, an Army spokesman said Thursday. A total of 18 companies and individuals are barred for a definite period from government work. Seven more face debarment... (full article)

U.S. Army Major John Cockerham made a lot of money selling his influence as a contracting officer – usually for several hundred thousand dollars at a time – to guarantee certain military contractors would win government bids, according to federal investigators.

But the 41-year-old Louisiana native was tripped up by his efforts to launder $9.6 million in bribes from eight yet-unnamed contractors while he was stationed in Kuwait in 2004 and 2005, according to court documents filed July 23 in federal court for the Western District of Texas. Investigators – who have recovered about $400,000 – say he was slated to get $5.4 million more.

Cockerham used his relatives – his wife, Melissa, and later his sister, Carolyn Blake – as go-betweens to receive bribes and deposit the money in banks in Dubai, Jordan and Kuwait, in one case an unspecified Bank of America branch, according to court documents.

The group used a system of code names – such as Mr. and Mrs. Pastry and Destiny Carter – and a ledger to keep track of the money.

The U.S. Department of Justice and U.S. Army on Aug. 23 charged all three with conspiracy to defraud the United States and to commit bribery, conspiracy to obstruct justice, and money laundering conspiracy. John Cockerham was also charged with three counts of bribery. The FBI and Internal Revenue Service also helped unravel some of the complex financial transactions.

The criminal complaint also states that more-senior military officials could have been part of the scheme, noting that Cockerham's supervisors had to approve his decisions. Justice Department spokesman Brian Sierra wouldn't comment on whether more indictments are forthcoming, but said there are "ongoing investigations into this matter." The court documents don't identify other suspects.

From late June 2004 through late December 2005, John Cockerham was deployed to Camp Arifjan, Kuwait, serving as a contracting officer responsible for soliciting and reviewing bids for Defense Department contracts in support of operations in the Middle East, including
Operation Iraqi Freedom.

The contracts were for various goods and services, including bottled water destined for soldiers serving in Kuwait and Iraq. He also did extensive research on the best way to launder his millions, according to authorities.

Documents seized during the search show multiple pages "comparing the benefits of various offshore banking havens" and even four pages on the "anti-money laundering statutes enacted by the Cayman Islands."

Investigators also found a handwritten note about J. Cockerham's interest in two books: "Crime and Secrecy: The Use of Offshore Banks and Companies," and "Offshore Haven Banks, Trusts and Companies: The Business of Crimes in the Euromarket." A second page contained notes
on how to launder money through real estate and how to use a friend to conceal your own identity... (full article)
Posted by Christopher Dickey at 6:11 PM 2 comments: