My 40 Years Covering War and Migration

As I prepared for the Salon on Stockton conference in Princeton NJ last April, I looked back on 40 years covering war and migration ...

I started my career with The Washington Post in the 1970s covering immigrant communities in the DC area, from Vietnamese boat people to Salvadoran refugees, which is how I wound up as Central America bureau chief for the Post in 1980.

Along the way, there were certain fundamental issues that kept staring me in the face, and that I realized very few Americans understood, especially when it comes to the root causes of wars and migration.

One is the insidious nature of military occupation, an evil borne by both the occupied and the occupier. In 2011, as the 2012 presidential elections approached, Newsweek produced this brief film clip to explain:

A lot of Americans have trouble understanding, as well, the vital importance of extended families – what we call tribes, clans, even mafias – in most of the world's cultures. “Chain migration”? “Family reunification”? In Summer of Deliverance: A Memoir of Father and Son, published 20 years ago, I reflected on Americans who “have” families, and people in the rest of the world who “belong” to them. 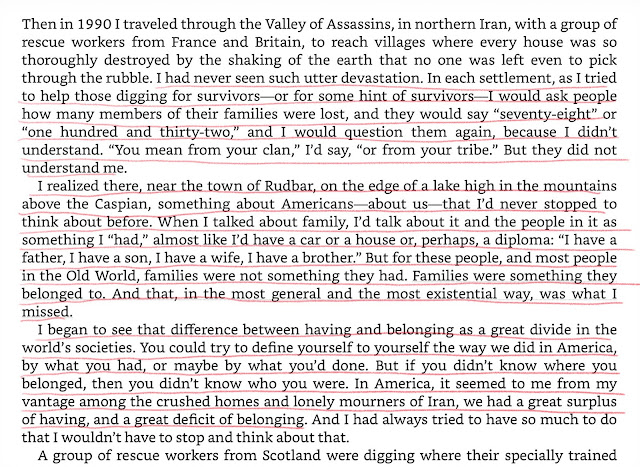 To break through those barriers of public obliviousness takes a huge amount of work, which is one reason I admire the new book on Syria, No Turning Back by Rania Abouzeid, which I reviewed for The New York Times.

But the frustrations for a reporter are enormous, as I found reviewing three novels by war correspondents in 2003.

In 2015, after the world was moved to tears by photos of little Alan Kurdi washed up on a beach in Turkey, CNN asked me to reflect on the refugee crisis. It's a short clip, but I said about as much as I could then, or now.


Finally, I suspect some people who have seen the invitations to Salon on Stockton have been wondering what a book about the Civil War has to do with a discussion of modern wars and migrations.

Quite a lot, in fact.

Americans have forgotten most of their "little" wars and even some of the bigger ones. Who remembers that in the 1980s and 1990s we carried out military actions against one enemy or another, covertly or overtly, almost every year. I know, because I was on the ground during many of those operations watching people dying and bombs falling, and discovering when I was back in the States that people turned the page or changed the channel as soon as they were told "mission accomplished."

But there is one war that Americans never forget, and that is the Civil War, and it was the direct outgrowth of one of the most hideous forced migrations in history: the transport of slaves from West Africa to the Americas. By the late 1850s, many in the American South were anxious to reopen that trade, which had been recognized as a holocaust by most civilized nations and banned half a century before. In point of fact, profiteering American ships had never stopped carrying slaves—Old Glory dominated the market—even though by mid-century most of the African captives were destined for Cuba, where the economy was built on the principle that you could work a Negro to death, because he was easy to replace with cheap new imports.

Eventually under pressure from the British the U.S. Federal government tried to interdict some of that traffic, and some of the criminal ships were brought into Southern ports. But Southern grand juries refused to indict as, increasingly, they refused to acknowledge the authority of Washington. For economic and what they claimed were moral reasons, the secessionists were pushing to reopen the slave trade with Africa, and used it as a wedge issue to tear apart the country.

This is the description in Our Man of Charleston of one of those slave vessels at a moment when, for many who had talked about re-opening the trans-Atlantic slave trade as a theoretical possibility, its horrors suddenly were put in front of their faces:

"THERE, RIGHT IN CHARLESTON HARBOR , was the horror that the South did not want to imagine—a slave ship. Vomit and urine and feces and blood had seeped deep into the raw wood of the sunless, slapped-together slave decks in the hold, staining them indelibly with filth. Cockroaches by the millions seethed among the boards, and clouds of fleas and gnats rose up from them. The stench that came from this vessel wasn’t the smell of a ship full of cattle and horses, but that peculiar smell that surrounds humans, and only humans who are very afraid and very sick or dying or dead. And in late August 1858, when the water in Charleston Harbor was as still and flat and thick as oil, and the air was stifling hot and heavy, that hideous odor issued from the brig called the Echo captured off the coast of Cuba a few days before."

Of the 455 Africans taken on board the Echo near Kabinda on the African coast, more than 100 perished during the weeks at sea, and were thrown overboard. "The shark of the Atlantic is still, as he has ever been, the partner of the slaver trader," wrote a British editorialist. And even after the survivors were taken off the ship they continued to die every day. They were housed temporarily in what was then the still-unfinished Fort Sumter out in Charleston Harbor, and many were so weak they could not even step over the lintel. The U.S. marshal at Charleston, who previously had been vocal in his support for reopening the slave trade with Africa, felt differently after watching over some of its victims for three weeks at Sumter. "Thirty-five died while in my custody," he wrote to a friend, "and at one time I supposed that one hundred would have fallen a sacrifice to the cruelties to which the poor creatures had been subjected on board the slaver. I wish that everyone in South Carolina who is in favor of the re-opening of the slave trade could have sen what I have been compelled to witness ... It seems to me that I can never forget it."

Yet people see what they want to see, and the cynical report what they want to report.  The anti-Federal pro-slave-trade secessionists insisted those captive Africans from the Echo were fat and happy while they stayed at Sumter. The "savages" appeared to be "in fine spirit and entertained their visitors with a display of their abilities in dancing and singing," wrote the ardently secessionist Charleston Mercury.

You see, fake news is nothing new at all, and one of its accomplishments is to help people escape responsibilities for the horrors they inflict, while inspiring them with hysterical fears of those who are foreign, or simply of another race.

That was true on the road to Civil War. And, sadly, it is all too true today.