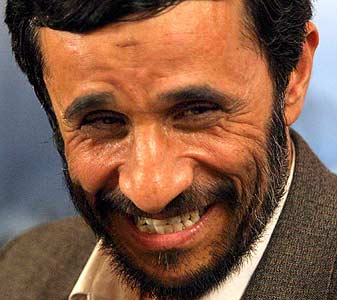 Nukes: Iranians want nuclear know-how—and seem to be daring the West to stop them.

Jan. 23, 2006 issue - On the ski slopes of Dizin in north Tehran, boys and girls mingle freely, listening to Madonna, Shakira and Persian pop diva Googoosh. Headscarves are reduced to hair bands, and Mahsid Sajadi, a 25-year-old graphic designer, is sporting a Star-Spangled Banner bandanna her cousin sent her from Orange County, Calif. Sajadi, modern and cosmopolitan, has almost no opinions in common with Iran's rabble-rousing ultraconservative President Mahmoud Ahmadinejad—except when it comes to nukes. "We have a right to have nuclear technology," says Sajadi. "We are a nation with an ancient civilization and rich culture. I think it's really hypocritical of Mr. Bush to criticize Iran for having nuclear technology while Pakistan, India and Israel have nuclear bombs.

Atomic research, atomic power, even the atomic weapons the Iranian government officially says it doesn't want are issues of ferocious nationalistic pride throughout the country, and Ahmadinejad knows it. Last week he provoked an international crisis by removing the seals from nuclear-processing equipment, ending a voluntary moratorium on research. After a firestorm of outrage from the United States and Europe, with vows to isolate Iran and haul the regime before the United Nations Security Council, Ahmadinejad gave a rare press conference. He was relaxed, folksy, cracking jokes. "If they want to destroy the Iranian nation's rights by that course," he said, "they will not succeed."

He could be right. The complex, contradictory game of secrecy and revelation, cooperation and provocation that the mullahs have played since some of their hidden nuclear facilities were discovered in 2002 has revealed just how little leverage Washington and its allies really have....
Posted by Christopher Dickey at 1:13 PM