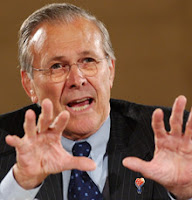 As this week's Shadowland column implies, some present and past CIA officers may want to think twice, or three times, before traveling to Europe. That may be true for more senior Bush administration figures as well. Consider the reception Rumsfeld has been getting in Paris:


PARIS (AFP) - French, US and German rights groups said Friday they had filed suit for "torture" against ex-US defence secretary Donald Rumsfeld, currently in Paris, for his role in the Iraq war and the US "war on terror".

Around 20 campaigners gave Rumsfeld a rowdy welcome as he arrived for a breakfast meeting in Paris, yelling "murderer", waving a banner and trying to push into the building, according to the organisers, a political magazine. ... (more)

The plaintiffs, which include the French-based International Federation of Human Rights Leagues (FIDH) and the U.S. Center for Constitutional Rights (CCR), say Rumsfeld authorized interrogation techniques that led to rights abuses.

The United States says it does not torture, though it has authorized several methods widely condemned by rights groups such as exposure to extreme temperatures and 'waterboarding', or simulated drowning.

"We will only stop once the American authorities involved in the torture program are brought to justice," CCR chief Michael Ratner said in a statement posted on the FIDH Web site.... (more)

Shadowland: Judgment Day for the CIA?
In a real-life version of 'Rendition,' a determined Italian prosecutor is hunting down those charged as the Bush administration's contract kidnappers. http://www.newsweek.com/id/62129

Posted by Christopher Dickey at 5:59 AM