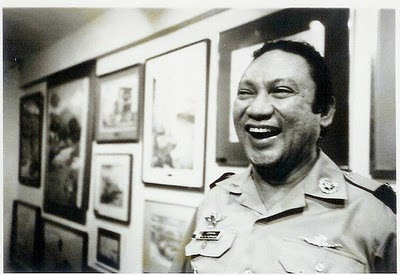 Shadowland: Noriega’s Last Laugh, 27 April 2010After the United States overthrew Panama's dictator in 1989, it thought such operations would be easy. Then came Afghanistan and Iraq. http://www.newsweek.com/id/237043

Audio: BBC/NPR The World: Noriega Appears Before French Judge
Former Panamanian dictator Manuel Noriega appeared before a French judge today after being extradited from the United States on money laundering charges. Noriega had been in a US jail since 1989 when American troops ousted him from power. Marco Werman gets details from Christopher Dickey, Paris Bureau Chief for Newsweek. http://www.theworld.org/2010/04/27/former-panamanian-dictator-appears-before-french-judge/
Photo of Noriega taken at his home in 1982. (c) Christopher Dickey

Posted by Christopher Dickey at 10:02 AM