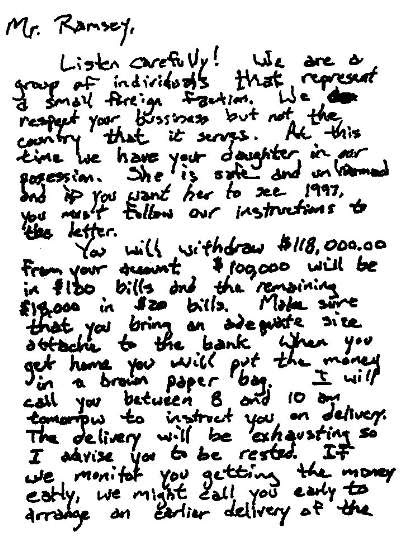 A couple of follow-ups on last week's column, "Pulp Fact," about the JonBenet Ramsey case:

It's intriguing that the ransom note for JonBenet claimed her abuction in the name of "a small foreign faction" that respected Mr. Ramsey's "business but not the country that it serves." How strange, and how appropriate, one would think, if the kidnapper were a would-be expatriate looking to bankroll his dreamed-of travels to Central America, Europe and Thailand ...

More substantively, Media watcher Andrew Tyndall's forthcoming rundown on network news coverage gives a good picture of what he calls "JonBenet's Summer Diversion":
It was fortuitous that Monday saw a ceasefire end five weeks of fighting in southern Lebanon between the Hezbollah militia and the Israeli Defense Force. This letup in hard news cleared the way for tabloid tales. “It was a story that, as they say, had all the elements,” NBC’s Mike
Taibbi reminded us, “a pretty little girl with a melodic name, JonBenet, a beauty pageant veteran already at age six, found strangled, possibly sexually abused, and beaten to death in
her own Boulder home on the day after Christmas.” That was 1996. Now a suspect has been arrested in Thailand, to lead the year’s heaviest (44 min v 6 52-wk-avg) Crime week.

WEAK CONFESSION The Ramsey family archive was dusted off. Videotape of Little Miss
Colorado pageant performances was rerun. The bereaved parents’ protestations of innocence were reaired. A journalism professor turned JonBenet documentary filmmaker had tipped off prosecutors about one of his e-mail correspondents. They tracked down John Mark Karr, an expatriate schoolteacher, to Bangkok. “I was with JonBenet when she died,” he confessed.
“She died accidentally.” Case closed—except for a few details. ABC’s Dan Harris cited Karr’s
claim that he drugged the girl: “The autopsy report said drugs were not detected.” That Christmas, CBS’ Erin Moriarty added, “Karr’s former wife claims he was at home in Alabama.”
When Karr’s handwriting was compared with the ransom note, ABC’s Bill Redeker reported, independent document examiners were “dubious.” CBS legal analyst Andrew Cohen concluded: “You never really see a case where a confession weakens the perception of the defendant’s guilt.” This may be a case of “suicide by confession.”

POOR PRIORITIES For all the attraction of that cold case, the networks still inexcusably spurned serious stories. On the economic front, only NBC assigned a reporter to cover Ford
Motors’ decision to slash automobile production by 21% this fall. Only ABC assigned a reporter to the ruling that warrantless wiretaps of citizens by the National Security Agency are unConstitutional. And only CBS had a correspondent cover the verdict that the tobacco industry ran a racketeering enterprise to market cigarettes through a conspiracy of lies: “Guilty,” declared Wyatt Andrews, “but the monetary award was zero.” ...