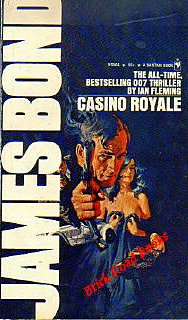 I still haven't seen the latest film version of "Casino Royale," but I gather from recent news stories that it includes the original Ian Fleming recipe for a devastating martini. (Charles Bremner's piece in the Times of London about the sudden global demand for Lillet was particularly amusing.) But while reading through my old copy of the novel (the same as the one pictured, pages 40 and 41) I was struck by the conversation that surrounded the recipe, reminiscent as it is of a cosmopolitan hedonism that seems long lost. It is the quintessence of classic Bond:

'My name's Felix Leiter,' said the American [CIA agent]. 'Glad to meet you.'

'Oh, yes,' said his companion, 'and now let's see. What shall we have to celebrate?'

Bond insisted on ordering Leiter's Haing-and-Haig 'on the rocks,' and then he looked carefully at the barman.

'A dry Martini,' he said. 'One. In a deep champagne goblet.'

'Just a moment. Three measures of Gordon's, one of vodka, half a measure of Kina Lillet. Shake it very well until it's ice-cold, then add a large thin slice of lemon-peel. Got it?'

'Certainly, monsieur.' The barman seemed pleased with the idea.

Bond laughed. 'When I'm - er - concentrating,' he explained, 'I never have more than one drink before dinner. But I do like that one to be large and very strong and very cold and very well-made. I hate small portions of anything, particularly when they taste bad. This drink's my own invention. I'm going to patent it when I can think of a good name.'

He watched carefully as the deep glass became frosted with the pale golden drink, slightly aerated by the bruising of the shaker. He reached for it and took a long sip.

'Excellent,' he said to the barman, 'but if you can get a vodka made with grain instead of potatoes, you will find it still better.'

'Mais n'enculons pas des mouches,' he added in an aside to the barman. The barman grinned.
'That's a vulgar way of saying "we won't split hairs," ' explained Bond.

But Leiter was interested in Bond's drink. 'You certainly think things out,' he said with amusement as they carried their glasses to a corner of the room. He lowered his voice:
'You'd better call it the "Molotov Cocktail" after the one you tasted this afternoon.' ...
Posted by Christopher Dickey at 10:05 AM