Paths to War - and Out of It 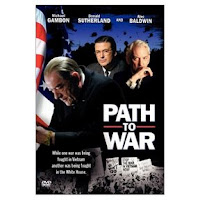 These last two paragraphs from the cover story of Newsweek's U.S. edition this week are worth reading closely:
It is not out of the question that Bush 43 will be brought around by the so-called Realists. Fantasies of a liberal democracy in Iraq are long gone. The most Bush can reasonably hope for in Iraq is some measure of stability, which is what the Realists want, too. Bush's situation—and petulant tone—are not unlike Lyndon Johnson's in 1968, when the Vietnam War was getting no better, despite troop levels' reaching a half-million men and a heavy bombing campaign. Johnson's new secretary of Defense, Clark Clifford, was a clever fixer/statesman, just like Baker. Johnson ranted to his advisers, "Let's get one thing clear! I'm telling you now that I'm not going to stop the bombing!" (Bush last week: "There's one thing I'm not going to do: I'm not going to pull the troops off the battlefield before the mission is complete.") But Clifford and the other Wise Men he brought into the White House did persuade LBJ to halt the bombing and open peace talks with the North Vietnamese. Baker & Co. might still nudge Bush onto a track that involves more diplomacy and less force.
There is, however, a cautionary coda to the Vietnam comparison. The revolt of the Wise Men in 1968 did change administration policy—but it did not end the war. The peace talks dragged on until Richard Nixon became president in 1969; he then re-escalated the war, which didn't end until another five years had passed and 25,000 more American soldiers had been lost. Iraq has not cost nearly as many American lives. But Vietnam fundamentally shaped America in ways that reverberate even today, and no matter what happens between George Bush and Jim Baker in the coming days and weeks, it is likely that Iraq will be with us for as long as Vietnam has been—or longer.
Evan Thomas, who wrote the story, was also the c0-author of a fascinating book called "The Wise Men," in which Clifford played a major role. I'm happy to see it's still in print.
The lessons of Vietnam are complicated, but they're certainly worth studying today. If you want a quick short course, I'd suggest watching the HBO movie "Path to War," which came out in 2002 and is now available on DVD. It was John "The Manchurian Candidate" Frankenheimer's last film. Donald Sutherland plays Clifford. Alec Baldwin is McNamara, and Michael Gambon is a convincing LBJ. It presents a vivid picture of Johnson Agonistes, and gives a disturbingly accurate sense of how good intentions and bad advice can suck the United States into a quagmire.
One final note: all "ground combat troops" had been pulled out of Vietnam by 1972, on the eve of that year's presidential elections. The war went on for three more years, and ended in disaster after the U.S. Congress finally decided to pull the plug. But the outcome was inevitable in any case. - C.D.
Posted by Christopher Dickey at 10:02 AM