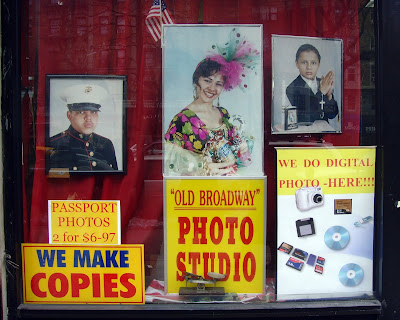 The Shadowland column "Urban Legends" argues that new immigrants play an important role making America's big cities safer. Among sociologists and many people in law enforcement, this is understood. But it's so counterintuitive that I thought it might be useful to post a couple of notes and links.

One of the most thorough but accessible background reports is from the Immigration Policy Center, "The Myth of Immigrant Criminality and the Paradox of Assimilation: Incarceration Rates among Native and Foreign-Born Men," available for download as a PDF.

The New York Times' recent article about the decline in homicides does not deal directly with the immigrant question, but is a fascinating read: New York City Murder Rate Falling Fast.

Robert Sampson at Harvard and Jim Lynch at John Jay College were both kind enough to share presentations and papers with me that have not yet been published, but which I hope to link to when they are.

The NYPD also generously gave me a print-out list of 52 foreign countries where 284 of its police cadets in the Dec. 2006 class at the academy were born. The largest numbers come from the Dominican Republic (55), Haiti (24), Jamaica (23), China (18), Poland (12), and Bangladesh (11). Perhaps less predictably there are six from Pakistan, four from Turkey, two from Kazakhstan, two from Kosovo, one from Burma, one from Bosnia, another from Indonesia, and so on and on.

And then there's this story:

His family lived next to a crack house in Milwaukee, where he says he often heard gunshots and came home to find thieves had stolen the things that his father had worked hard to provide for his mother, older brother and sister.

So he got excited when two officers visited his high school to recruit police aides. The doe-eyed 15-year-old decided he wanted to become a cop, maybe make things a little better than he had it growing up.

"I wanted to change my neighborhood, to change other people's neighborhoods, so they could feel safe, you know," says Ayala, now 25. "Because I didn't feel safe."

He wanted that, it turns out, badly enough to break the law.

Though Ayala's family moved to Wisconsin in 1992 from Guadalajara, Mexico, he says he didn't realize until after he'd made up his mind to wear a badge that he was in the country illegally. He didn't know it until his father, Salvador, told him that if he wanted to be an officer, he would have to go back to Mexico and apply for citizenship, a process that can take at least 10 years.

Ayala cried and soon his father, mother and brother wept, too.

A few days later, his father found another option - one that would help Ayala get his dream job, but also would take it away and could cost him his freedom.

His father's cousin, Carmen, who lived in Chicago, would allow Ayala to take the identity of her son, Jose Morales, who was born five months after Ayala in Illinois and died of stomach cancer when he was about 7....(more)
Posted by Christopher Dickey at 11:43 PM

Nice references--not only is crime a counterintuitive issue with immigration--The idea that there is a drain on medical facilities and the tax base is erroneous as well, based on government stats.

Any time human nature's prejudice has a chance to transform into irrational bigotry, the tough method of handling this degeneration is through education and emlightenment--the knee-jerk reflexive xenophobic repsonse is always the easier way out.
So many facts can be thrown in the face of anti-immigration sentiment to prove that the historic and current flow of the foriegn-born moving into the US has a positive effect on the culture, and the economy, that the only reason left to fear immigration is just that--ignorant fear and hatred.

...most economists concur that immigration has reduced the wages of native workers with relatively little education and few skills. But for the remainder of the U.S. workforce, the impact has not been significant…

From an economic standpoint, the evidence seems clear that draconian measures such as massive deportations or major reductions in legal immigration levels would be counterproductive to the United States and its citizens.—