In the current issue of Newsweek we take a look at the killing of British student Meredith Kercher ("Murder Most Wired") and the primary suspects, including American co-ed Amanda Knox, in the context of the investigation pulled together by the Italian Communications Police. It’s a disturbing and compelling murder mystery in any case, but there are some distinctly 21st-century (and 20-something) twists.

The whole idea of Communications Police raises Orwellian questions. One thinks of the Academy Award-winning German film, “The Lives of Others,” about the way the Stasi listened in on the private worlds of people in . Was the movie historical drama or historical parable? That's the question that kept going through my mind as I watched the DVD recently.

In one way or another (if by other names) the communications police are becoming a standard part of law enforcement just about everywhere in the world, and like most police they can oppress or protect depending on the societies where they serve and the laws that govern them.

“For all the benefits and richness that the Internet and modern telecommunications makes possible, there is a dark side to the virtual world,” says Tim Connors, head of the Manhattan Institute’s Center for Policing Terrorism. “Unfortunately, these tools also enable crime, terror, violence, bullying and other dysfunctional behaviors. Police in the have taken notice. Cyber crime units and virtual investigative techniques are becoming routine business. Law enforcement is also exploiting the Internet as a source of intelligence, which can lead to preventing acts of crime and terror before they occur.”

In the Kercher case, in addition to the elements discussed in the current Newsweek story, you can surmise how the Web may have contributed to motive, and it certainly helps to given and idea of the character of the key suspect.

Whether the killer or killers were influenced by the vast libraries of violent pornography available on the Web is, at this point, an open question. The Communications Police have remained as quiet about such details found on the computers used by the suspects as their Italian CSI colleagues have about the DNA of hair and skin under Kercher’s nails. But the government prosecutor said in a statement earlier this month that the fatal wound to Kercher’s throat, a stab into her windpipe that left her voiceless and bleeding to death slowly, came during an episode of “extreme” sex in which she began struggling to break free. (Some Italian press reports suggest Kercher’s spinal cord may have been fractured as well.)

As for Knox, her short stories on the Web are interesting not only because one 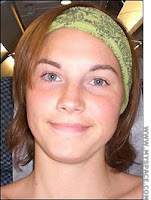 character talks glibly about date rape, but because another evidently practices self mutilation. In developing what is supposed to be her own persona on Facebook, “Foxy Knoxy” sounds like she was experimenting a little nervously with the risqué freedoms she found in . She and a German uncle visited the red-light district in to do a little gawking on “a street where naked women are posing in front of red tinted windows that they can open to make the deal. ewwww.”

Knox and her sister got lost in on a first look-see in early September and decided to accept a ride from an older man, even though she thinks hitchhiking is dangerous. She quickly told the driver in broken Italian “we aren’t interested to[sic] going out with his 40-something year old self.” Looking back on that same trip, Knox wrote in her online diary, “I bumped into the most beautiful black man I have ever seen.”

We don’t know from Facebook who that might have been. But two months later, two different African-born men would loom large in the investigation of Meredith Kercher’s murder.

One of them is Diya “Patrick” Lumumba, the slight, round-faced 40-something Congolese owner of a bar called “Le Chic” where Knox landed a job waitressing. After her arrest, Knox would tell police a disjointed story about seeing Lumumba at the cottage she shared with Kercher the night of the murder and cowering in the kitchen with her hands over here ears “because in my head I could hear Meredith screaming.” But Knox also denied that she was there at all that night. She said that she had been smoking marijuana with Sollecito at his place, and making love with him and taking a long shower with him, and that police interrogators had just confused her. She said she might have been dreaming about seeing Lumumba. In fact, no trace of Lumumba – no fingerprints, no DNA -- was found anywhere in the cottage. He has been released for lack of evidence but remains under investigation.

The other African-born suspect is 20-year-old Rudy Hermann Guede from the , and some people including Amanda Knox might think of him as handsome (although his infamous YouTube appearance doing his imitation of an extraterrestrial vampire wouldn’t leave you with that impression.) We wrote about Guede at length in the current Newsweek article, and also in a piece about his arrest last week by Barbie Nadeau.

These two YouTube postings of Guede and Knox are likely to haunt them for a long time, even if both are proved innocent. In the Knox video, she's silly and drunk, laughing away as a boy in the room makes an anti-Semitic slur about the girl doing the filming.

Posted by Christopher Dickey at 1:49 PM