I found the subject of Frank Rich's column in Sunday's New York Times, "The Guns of August," very worrisome indeed:

“IT is time to water the tree of liberty” said the sign carried by a gun-toting protester milling outside President Obama’s town-hall meeting in New Hampshire two weeks ago. The Thomas Jefferson quote that inspired this message, of course, said nothing about water: “The tree of liberty must be refreshed from time to time with the blood of patriots and tyrants.” That’s the beauty of a gun — you don’t have to spell out the “blood.”... (more)

When I put it on Twitter and Facebook, friends were quick to point out how much the mood and rhetoric resembled what they had heard in the Holy Land before the assassination of Yitzhak Rabin in 1995, which surely was -- from the murderer's point of view -- the most successful act of terrorism ever carried out in Israel.

A further reflection of the darkening zeitgeist is the lead story in the current Marianne weekly: 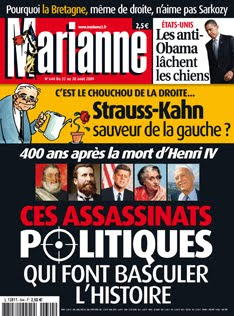 Historical and philosophical covers are ubiquitous in French news magazines in August. (One brought out a special issue on Spinoza this month, another on Pascal.) But Marianne tries to combine a historical anniversary with the spirit of the age: "400 Years After the Death of Henry IV: Those Political Assassinations that Change the Course of History."
Posted by Christopher Dickey at 11:29 AM