Lebanon Defined: Then and Now

Two amazing visions of Lebabon, one a trite travelogue from the 1960s that nonetheless shows how it was, the other a dazzling essay from today that explains exactly how it is.

(Thanks to Eric Pape for bringing the video to my attention)

And this, from a just-published essay on the anonymous but always intriguing Beirut blog, "Thinking Fits":

For me, the Lebanon I am living in could have become, in time, a mirror of its best yarns but instead decided to settle for its worst illusions. It is the Lebanon where the harassed, tree-rich mountains of yore peer over a filthy, ecoli- infested sea; where gorgeous parties float on thinly roofed lakes of your and my feces; where electricity still comes in dribs and drabs to entire communities; where rampant poverty is tempered and masked by a web of sectarian and feudal patronages; where food poisoning, skin diseases from toxic swimming pools, car pollution and day-long waits in traffic jams during the summer months are brandished as proof of tourism’s love of this haunt; where public works celebrate almost quarterly anniversaries on the same sites year after year after year.

This is the Lebanon that glides, haggard, stateless and broken, through life as if it’s waltzing its evenings away on marble; that thinks its sexy, beautiful, sophisticated, “with it”, when in actual fact it is over the hill, ugly, passé, money grubbing, uncouth, farts all day long, has BO and is downright moronic to boot.

August is a mother, ain’t it?

No, really, on a serious note, the other day, I was leafing through Phillips de Pury & Company’s catalogue for the May 16, 2009, auction and came across two photographs. One, titled Saida, is a shot by Elger Esser of the sea-planted citadel facing the city of Sidon. In life, it is decrepit and swimming in ink blue waters. Through Esser’s lense, it is poetry; for me, if not for him, a visualization of Lebanon as it should be: its damaged beauty still obvious to the eye, still loved, its mood melodic, even serene, its present mature and not allergic to introspection. The other photograph, by Fouad el Khoury, is of Beirut’s corniche on a very stormy day, blurred, perturbed and unbearably sensual. This imagined Lebanon is like a great idea that lives in its lazy author’s head refusing to dart out and become a full-grown story. Of my country’s many tragedies this one tugs most at the heart—at least mine. 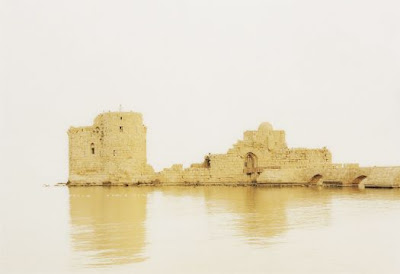 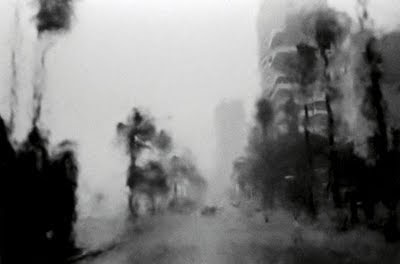 [To read the full essay, click here.]
Posted by Christopher Dickey at 10:51 AM