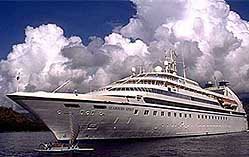 Talk about adventure vacations. I particularly like this version of the Seabourn Spirit saga as told in an e-mail from one of the retired American couples aboard:

SANTA ROSA, Calif. 6 Nov 2005- A local couple aboard a luxury cruise liner targeted by armed pirates off the east African coast Saturday recounted the terrifying moments as the bandits tried to board the ship in an e-mail to friends and family.

Two boats full of pirates, armed with grenade launchers and machine guns, approached the Seabourn Spirit about 100 miles off the Somali coast and opened fire while the bandits tried to get onboard, according to the Miami-based Seabourn Cruise Line, a subsidiary of Carnival Corp.

But the captain "swerved the ship sharply to the left trying unsuccessfully to ram the oncoming boat and then took off at full speed," Harry and Jan Hufford, of Oakmont, said in the e-mail obtained Saturday by The Press Democrat of Santa Rosa.

The couple, both retired Southern California government officials, wrote home shortly after the attack to assure loved ones that they were OK. None of the 151 passengers abroad the ship were injured, but one member of the 161-person crew was injured by shrapnel, cruise officials said.

According to the Huffords, the captain told passengers over the public address system around 5:30 a.m. "that a boat with armed men was coming along the starboard side and we were to lock ourselves in our cabins."

The captain later instructed passengers to gather in the ship's restaurant, and as the Huffords were leaving their cabin, they heard a heavy thud, the e-mail said. A rocket had hit a cabin nearby, "but it jammed in the metal balcony door frame and shattered the glass but fortunately exploded downward," it said.

"There are bullet holes at several locations and two of the floor-to-ceiling windows in the lounge at the rear of the ship were shattered by bullets," the Huffords wrote.

The Spirit, which sustained minor damage, was bound for Mombasa, Kenya, at the end of a 16-day voyage from Alexandria, Egypt. It was expected to reach the Seychelles on Monday, and then continue on its previous schedule to Singapore, company officials said.

The Seabourn Spirit's attackers are being deemed incompetent pirates, and indeed they may have been. (One has to admire the sang-froid of the Spirit's captain, first trying to run them over, then simply outrunning them.) But the possible nexus between piracy and terrorism on the high seas is a huge concern. Al-Qaeda itself has a long record of naval operations. The most successful was the suicide attack on the USS Cole in Aden harbor on October 12, 2000, which killed 17 people and injured 39. But there was also a successful attack on the French oil tanker Limburg off the coast of Yemen two years later, on October 6, 2002. As I reported in the very first Shadowland column, "Evil Genius," published February 20, 2003, Al Qaeda had planned a truly spectacular operation to take place on or about the same time as the attacks on the United States on September 2001. After the column appeared, based on foreign intelligence sources, those in the U.S. questioned the timing, but not the plans or intent. I'm posting the relevant bits here since there's no longer a live link to the original on the Newsweek site:

As described to NEWSWEEK for the first time by foreign officials who work closely with the CIA, the aim was to sink a U.S. warship with everyone aboard, and the scenario was every bit as grand and complicated as something out of an old James Bond movie. Through a front company, Al Qaeda actually bought a large
freighter equipped with a heavy-duty crane. It also bought several small speedboats from a manufacturer in the United Arab Emirates. The plan was to carry the smaller craft on the mother ship, fill them with explosives, lower them into the water and send them on their way toward the warship as, in effect,
suicide torpedoes. If those failed—and they would have been vulnerable to defensive fire if the ship’s crew was alert—the freighter itself was filled with explosives, making it the biggest conventional bomb ever built. It wouldn’t have to ram the warship to sink it, just explode nearby. According to these
officials, most of the crew on the Al Qaeda freighter didn’t even know what was going on. Some were from Pakistan, others from India. A few were Christians.

The head of this operation was Abd al-Rahim al-Nashiri, who played a key operational role in putting together the bombings of the U.S. embassies in Kenya and Tanzania in 1998 and blowing an enormous hole in the side of the American destroyer USS Cole in Yemen in 2000, killing 17 American sailors. “Nashiri does
his job very patiently,” says an Arab intelligence officer with intimate knowledge of the case. “Nairobi was three years in the planning.”

So what happened? By one account, Nashiri had trouble getting the enormous quantity of explosives needed for the Hormuz plot. But this intelligence officer says no: “It was all to do with the timing and the moving of the elements. The problem was security procedures.” The more grandiose a plan, the more people who
are involved, the greater the chance it will be compromised and some or all of the plotters caught. Nashiri knew he was already being hunted by the CIA. Jordan’s intelligence service had been tracking him since 1997. Rather than risk giving away the whole game—possibly the whole 9-11 plot—the operation was called
off.

Even after Al Qaeda’s Afghan base was broken up by the U.S. invasion in 2001, Nashiri—also known as Mullah Bilal—kept plotting seaborne operations, training frogmen for underwater demolition and pilots for small kamikaze aircraft. A group of Saudis was dispatched to Morocco to prepare the logistics for an attack on U.S. warships in the Strait of Gibraltar. Their mission was to rent a safe house and acquire Zodiac rubberized speedboats to use in a hit similar to the one against the Cole. But a tip from one of the Moroccans held at Guantanamo in early 2002 led to the arrest of the plotters by the Moroccan security services.

Nashiri tried to change his strategy. Like other Al Qaeda planners, he scaled back the grand plans and focused on what he thought would be easier targets: attacks on American compounds in the northwest of Saudi Arabia and in Jeddah. But those plots were foiled. Too many people knew about him. Too many of the
Arab services, as well as the Americans, were on his trail.

Late last year, Nashiri was spotted in Yemen, but the Yemenis didn’t arrest him. He went to Dubai and was picked up there. Ever since, Nashiri has been in one of the secret CIA interrogation centers outside the United States, beyond the reach of American law or mercy. According to intelligence sources familiar with his dossier, he’s been quite talkative. By combining what Nashiri has told them with details from other captured masterminds like Abu Zubaydah (none of whose
whereabouts are a matter of public record) the CIA can cross-check information, spot inconsistencies, and expand its web of coverage.

Safer. But not safe.

“The elements who worked with Nashiri, they have the same expertise,” says the counterterror chief of a friendly country. “When Nashiri was arrested they became more determined than ever to take his place.” They are also more determined than ever to get weapons of mass destruction. The acquisition is very
risky from an operational point of view. The terrorists have to go outside their closed and secure networks if they want nukes, plutonium or sophisticated chemical and biological weapons, and that exposes them to capture. But there’s this great advantage: once you’ve got the Bomb or its bio-chem equivalent, you
don’t have to be a genius to use it. You just have to be evil.
Posted by Christopher Dickey at 11:20 AM