Torture: Reliving the Battle of Algiers 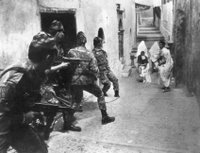 Thanks to Jesse Kornbluth for sending me this translated excerpt from Gillo Pontecorvo's amazing movie about the ambiguities of occupation and torture, "The Battle of Algiers":
A scene in which journalists interview Mathieu,the French colonel who has been sent to Algiers to put down the rebellion:

MATHIEU
Let's try to be precise then. The word "torture" does not appear in our orders. We have always spoken of interrogation as the only valid method in a police operation directed against unknown enemies. As for the NLF, they request that their members, in the event of capture, should maintain silence for twenty-four hours, and then, they may talk. Thus, the organization has already had the time necessary to render useless any information furnished ... What type of interrogation should we choose? ... the one the courts use for a crime of homicide which drags on for months?

MATHIEU
And those who explode bombs in public places, do they perhaps respect the law? When you asked that question to Ben M'Hidi, remember what he said? No, gentlemen, believe me, it is a vicious circle. And we could discuss the problem for hours without reaching any conclusions. Because the problem does not lie here. The problem is: the NLF wants us to leave Algeria and we want to remain. Now, it seems to me that, despite varying shades of opinion, you all agree that we must remain. When the rebellion first began, there were not even shades of opinion. All the newspapers, even the left-wing ones wanted the rebellion suppressed. And we were sent here for this very reason. And we are neither madmen nor sadists, gentlemen. Those who call us fascists today, forget the contribution that many of us made to the Resistance. Those who call us Nazis, do not know that among us there are survivors of Dachau and Buchenwald. We are soldiers and our only duty is to win. Therefore, to be precise, I would now like to ask you a question: Should France remain in Algeria? If you answer "yes," then you must accept all the necessary consequences.
Posted by Christopher Dickey at 9:47 AM