Give Me That Old Time Secularism 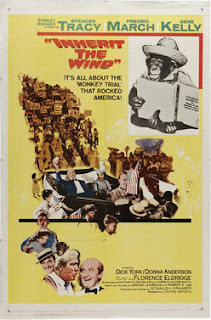 In 1960 the notion of modernity that Kennedy represented was essentially secular. As I say in the current OnFaith posting, Kennedy told the American public his faith was a personal matter and not nearly as important as other critical issues at home and broad. Romney, on the other hand, tried to play down his Mormonism while playing up his religiosity to appear, if not holier, then as-holy-as-thou in his search for support from Republican evangelicals.

After I filed the blog item, I re-read the play "Inherit the Wind" by Jerome Lawrence and Robert E. Lee, which I bought in high school and have had on my bookshelf ever since. In this age when, God save us, creationism has been revived as a serious political issue, it's a fascinating study of the debate, not least because it stops short of ridiculing the religious fundamentalists even as it shows the absurdity of their absolutism. The play acknowledges the need for faith, and then some.

At the end of a brief speech to his girlfriend, Bertram Cates (based on John Scopes), the high school teacher charged with the crime of teaching evolution, delivers one of the more elegant lines in the play: "You know why I did it. I had the book in my hand, Hunter's Civic Biology. I opened it up and read my sophomore science class Chapter 17, Darwin's Origin of Species. All it says is that man wasn't just stuck here like a geranium in a flower pot; that living comes from a long miracle, it didn't just happen in seven days."

Of course what the play is really about is not evolution, but our freedom to think and speak as we choose in the face of religious literalists who want to stop the world from changing as Joshua stopped the sun and the moon from moving through the sky.

"All I want is to prevent the clock-stoppers from dumping a load of medieval nonsense into the United States Constitution," says Drummond (the Clarence Darrow figure played by Spencer Tracy in the movie). And, later: "I hold that the right to think is very much on trial! It is fearfully in danger in the proceedings of this court."

If we are not careful, as we bend to the winds of religiosity that have overwhelmed our political debate, the right to think could well be at stake in many trials to come. - C.D.
Posted by Christopher Dickey at 10:30 AM

The high-minded esoteric themes of "Inherit the Wind" belie its origins as a theatrical account of a real event. In fact the Scopes "Monkey" Trial was initiated as a ploy to attract attention, and hopefully incoming tourist and commercial dollars, to Dayton TN. From Wikipedia:
The American Civil Liberties Union (ACLU) had offered to defend anyone accused of teaching the theory of evolution in defiance of the Butler Act. George Rappleyea, who managed several local mines, convinced a group of businessmen in Dayton, Tennessee, then a town of 1,800, that the controversy of such a trial would give Dayton much publicity. With their agreement, he called in his friend, 24-year-old John Scopes, who was Clark County High School's football coach and had substituted for Principal Ferguson in a science class. Rappleyea asked Scopes to teach the theory of evolution.[4]

Rappleyea pointed out that while the Butler Act prohibited the teaching of the theory of evolution, the state required teachers to use a textbook—George Hunter's Civic Biology (1914)—which explicitly described and endorsed the theory of evolution, and that teachers were therefore effectively required to break the law.[4] Scopes could not actually remember having covered the section on evolution in Hunter's textbook, but he told the group "If you can prove that I've taught evolution and that I can qualify as a defendant, then I'll be willing to stand trial." (Source Needed)

Scopes became an increasingly willing participant, even incriminating himself and urging students to testify against him.[5] He was indicted on April 24, after three students testified against him at the grand jury, at Scopes' behest.[6] According to Edward J. Larson, Judge John T. Raulston accelerated the convening of the grand jury and "...all but instructed the grand jury to indict Scopes, despite the meager evidence against him and the widely reported stories questioning whether the willing defendant had ever taught evolution in the classroom."[7] Scopes was charged with having taught from the chapter on evolution to a May 7, 1925, high school class in violation of the Butler Act (and nominally arrested, though never detained). His bail of $500 was paid by Paul Patterson, owner of the Baltimore Sun.[8]