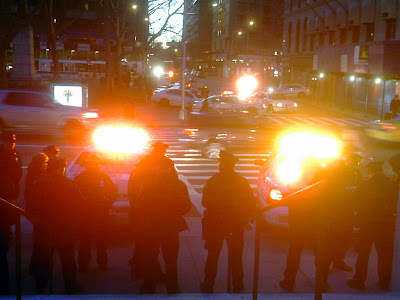 Yesterday's Shadowland column, "The Making of Homegrown Terrorists," drew rapid-fire responses from all over the United States.

A more-or-less random sampling of e-mails:

Name: Kathryn Wilcken
Hometown: Sheboygan, WI
Comments: Why are we only talking about Muslims here? How about the angry 'Christian' white males who bomb women's clinics and send death threats to doctors who provide theraputic abortions that are LEGAL under Roe vs. Wade? They're terrorists, too, and yet nobody talks about them! Timothy McVeigh was NOT a Muslim; he was an angry white male who murdered a lot of people. If you want to write an article about homegrown terrorists, then do one that includes ALL Americans, not just Muslim Americans! This piece is nothing but a racist screed against Muslims!
Name: Robert Schneider
Hometown: DeKalb, IL 60115
Comments:This a very informativ, brief summary.

Name: jimmy flaherty
Hometown: louisville, ky
Comments: Typical American racism and classism. Why am I not surprised?
Name: Timothy W. Brown
Hometown: Vine Grove, KY
Comments:"The making of the home grown terrorist" is a very exemplary paradigm of how certain groups of people can become suspectible to radicalization. But, the real danger is that hostile foreign intelligence/security services would be able to take advantage of this radicalization process in order to inflict damage upon countries in the West. The 'unremarkable' civilians would be perfect targets for foreign intelligence.
Name: Peter Olsson
Comments:In addition to 'human intelligence' we need to engage in respectful discussion, dialogue and confrontation with Muslim and Arab youths. The false theology, exegesis and misapplication of Sharia law should be vigorously challenged in ecumenical town hall and community meetings. Our communities should provide English classes and civics discussions that explore social justice and legal structures that deal with handling the irrational phenomena that tends to occur as an ordinary part of individual and group behavior among human beings. Equality of woman, respect for other religions than one's own need to be insisted upon. Active reaching out prevents enclave formation.
Name: o
Hometown: d
Comments: biggest propaganda I have ever seen
Name: D.L. Williamson
Hometown: Indianapolis, IN
Comments: People in this country seem to forget that terrorism in this country can also come in the color of WHITE and have last names like "McVeigh". They are in groups like the KKK, the "White Aryan Resistance" and all the other in-bred neo-Nazi groups in this country. Funny, how the FBI, local law enforcement amd the Department of Homeland Security have forgotten these THUGS...but I guess it is easier to do that when the TERRORISTS in question have lighter color of skin. By the way, for what it is worth , I am white.
"People" may forget, but I certainly do not. See, for instance:
Shadowland: Untrue Believers, 21 July 2005
The real global war is not between different faiths. It's against the madness of those like Atlanta bomber Eric Rudolph, who believe that their violence is noble.
Posted by Christopher Dickey at 4:40 PM