An American Reporter in Paris

“Mort Rosenblum has spent his entire working life in the wider world, and "Escaping Plato's Cave" is the fruit of that vast fieldwork — passionate, timely, and original, it is a book every American should read.”
—Paul Theroux

“A great foreign correspondent draws on forty years of travels and experiences to paint a vivid picture of how America is falling short of its highest values and crippling its global leadership.”
—James F. Hoge, Jr., editor, Foreign Affairs

Mort Rosenblum is one of the best journalists I know because he's one of the best at getting to the place where news is happening, digging it out and then thinking about it long and hard enough to make some sense of it.

He also has a way of living and working that just about anyone would envy: a boat on the Seine in the heart of Paris, a house among olive groves in the south of France. 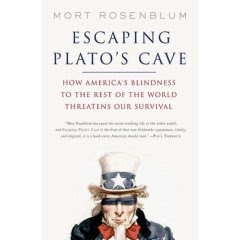 The little film above was made as an experiment with a pocket camera (a Canon SD1000) this afternoon over a delightful lunch prepared in the tiny galley of his boat by Mort's partner Jeannette. The video is crude, but does capture something of the man, his life and opinions. Of course, it also gives him a chance to plug his upcoming book, "Escaping Plato's Cave," about which more later. It will be published the beginning of October by Saint Martin's Press. - C.D.

Mort's own site, "Mort Unplugged," can be found at www.mortrosenblum.net
Posted by Christopher Dickey at 9:45 PM