The Surge, the Sun and the Sand 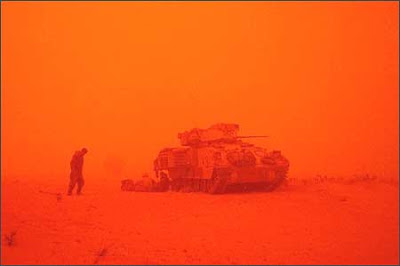 These stunning pictures wer taken by John Moore for AP Photo during the March 2003 drive into Iraq. They're a reminder of how important weather is, not only to the fighting, but when it comes to the dying in Iraq, a subject I'll be writing about shortly on the new Newsweek International Blog, "Why It Matters." The bottom line: the death count almost always goes down at the height of the summer heat from July to September, and again during the rain and dust storms of March. - C.D. 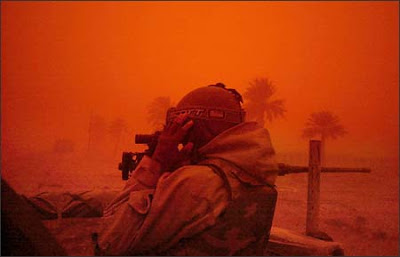 From the "Why It Matters" blog entry:

It was 111 degrees Fahrenheit for Americans in Baghdad today (43 Celsius for the Iraqis), and it's supposed to be hotter - 117 F or 47C - for the rest of the week. That's in the shade, of course, for those who can find it. Such infernal temperatures are pretty much the same every year. Nothing is quite as predictable in Iraq as the summer heat.

But another simple fact is just as evident: the death toll among fighters tends to decline in the dog days, because nobody wants to have to do battle in that stifling air, and those who have to go into combat tend to move more slowly and cautiously.

On the other hand, to the extent public records are available on non-governmental Web sites like iraqbodycount.org and icasualties.org (the Iraq Coalition Casualty Count, with which Newsweek did a major presentation on the Internet in December of last year), it seems that the civilian death toll, mainly from terrorist attacks, actually may remain high or rise in the heat of summer. Security forces are thinner on the ground. Roadside bombs can be put out at night and suicide drivers don't usually have to brave the hellish heat for very long before they punch their ticket to Paradise....

Posted by Christopher Dickey at 10:47 AM