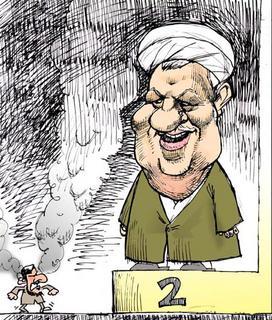 A note from the indefatigable and ever-thoughtful Nasrin Alavi, author of "We Are Iran: The Persian Blogs":

Hi Chris,
This is stranger than Ahmadi’nejad’s election victory. Iran's Rafsanjani given more powers. Basically the supreme leader of Iran has transferred some of his powers over to Rafsanjani. It is completely baffling in the light of what’s gone on recently. Has he been given more powers to curb Ahmadi’nejad and the new parliament who want to make a stand on the nuclear issue? Did the threat of Security Council referral work?
Or if I go into my Iranian conspiracy mode… Is Khamanei dying? What has Rafsanjani got on him that made him transfer his power?
Best
N

I don't have the answers, of course. I'm not sure anyone does outside the Iranian Inner Circle, but these are questions well worth asking. One should also consider the source cited by the original AFP dispatch, Mohsen Rezai. He now serves as secretary of the Expediency Council but made his rep, as it were, heading the Islamic Revolution Guard Corps from 1981 to 1997. Rezai is a man with ample ambition of his own, and his remarks about a power shift could be part of his personal strategy. As always, the Inner Circle is all about wheels within wheels. - CD

Cartoon by Nick'Ahang Kowsar, who's a very recently exiled talent, according to Alavi.
Posted by Christopher Dickey at 8:52 AM