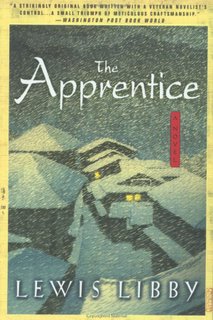 Lewis Libby, the now-former chief of staff and national security adviser to Vice President Dick Cheney, published a novel in 2001, the year he moved into the Old Executive Office Building. Called “The Apprentice,” it has nothing to do with Donald Trump. It’s set in a snowbound inn in 1903 Japan during a smallpox epidemic. An itinerant troupe of performers has just arrived, perhaps bringing the plague with them. The apprentice is a young man who must run the inn when the owners are away and the drama centers on his fascination with a girl among the performers. The style is spare and affects oriental naturalism. (Remember Libby's letter to Judy Miller? "Out West ... the aspens will already be turning. They turn in clusters, because their roots connect them." That sort of thing.)

The first pages, available on Amazon, make very strange reading this morning, like some allegory of the events that led to Libby’s indictment for allegedly lying about his interest in the identity of the nonofficially covered Valerie Plame Wilson: “He knew it was foolish to want to know the girl’s name. … But he wished to know the girl’s name.”

I particularly liked some of the "statistically improbable phrases," or SIPs, discovered by Amazon’s search engine. They give a random but revealing skim of weird images and perceptions from the prose of this man who helped shape the fictions that led us to war in Iraq: assistant headman, tiny dancer, man with the pole, mountain trousers, old samurai, lacquer workers, liquid woman, dead hunter, youth hesitated, charcoal maker, youth glanced, yellow fur, man with the club, youth nodded, youth stared, moment the youth, snow wall, young samurai.

One could almost confect a surreal little pseudo-Japanese poem: