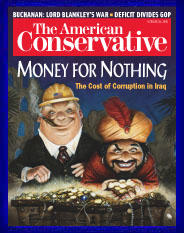 Thanks to A.E. for forwarding this devastating critique of corruption in occupied Iraq as published by The American Conservative Magazine. The author is a former CIA officer, but the research appears mainly to be from clippings. Never mind. Newsweek did an award-winning cover on "The $87 Billion-Dollar Money Pit" in December 2003, but it was overwhelmed in the news cycle a few days later when Saddam Hussein was pulled out of a hole by American forces. Remember when capturing Saddam was supposed to solve everything? As Giraldi points out, the enduring legacy of this occupation is corruption.

Money for Nothing: Billions of dollars have disappeared, gone to bribe Iraqis and line contractors’ pockets, by Philip Giraldi

The United States invaded Iraq with a high-minded mission: destroy dangerous weapons, bring democracy, and trigger a wave of reform across the Middle East. None of these have happened. When the final page is written on America’s catastrophic imperial venture, one word will dominate the explanation of U.S. failure—corruption. Large-scale and pervasive corruption meant that available resources could not be used to stabilize and secure Iraq in the early days of the Coalition Provisional Authority (CPA), when it was still possible to do so. Continuing corruption meant that the reconstruction of infrastructure never got underway, giving the Iraqi people little incentive to co-operate with the occupation. Ongoing corruption in arms procurement and defense spending means that Baghdad will never control a viable army while the Shi’ite and Kurdish militias will grow stronger and produce a divided Iraq in which constitutional guarantees will be irrelevant. ...

For more background, this is from July 2003:


$1 Billion a Week
And that’s on the low side. So much for a ‘self-sustaining’ reconstruction. Parsing the real cost for U.S. taxpayers
By Christopher Dickey
Newsweek
July 21, 2003.
ONE AFTERNOON HE was headed out on the highway to the Baghdad airport in a heavily protected convoy. Sen. Richard Lugar already had been warned that, on that road, “people get shot, there are fire fights.” Then the general with him suddenly ordered a machine gunner on top of a Humvee to get down. The reason: Iraqi killers are good at blindsiding American troops. “From time to time,” Lugar was told, “there are enemy, whoever they are, who sort of loop wires down from the bridges that might pluck somebody off at the neck as they go down the road.”
By the time Lugar’s trip to Iraq was over, the Indiana Republican worried the American people were being blindsided, too, by the true costs in blood and treasure of a war that has yet to end. “This idea that we will be in [Iraq] ‘just as long as we need to and not a day more’,” he said, paraphrasing the administration line, “is rubbish! We’re going to be there a long time.” Lugar said he kept demanding answers about the cost to American taxpayers and was not quite getting them. “Where does the money come from?” he asked. “How is it to be disbursed, and by whom?”
Last week, at last, some of the answers started coming in, and they were grim. Defense Secretary Donald Rumsfeld told a hearing that the “burn rate” for American money to fund the military presence in Iraq was now $3.9 billion a month—almost $1 billion a week. “This is tough stuff,” said a cranky Rumsfeld, lecturing the Senate committee. “This is hard work. This takes time. We need to have some patience.” ...
http://foi.missouri.edu/terrorintelligence/1billion.html

Posted by Christopher Dickey at 1:59 PM