The British National Archives offer a steady stream of revelations about the eccentricities of espionage: 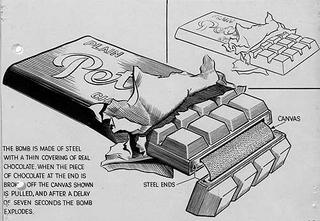 Newly released files reveal German techniques for camouflaging sabotage equipment (KV4 /284)- these include drawings and photographs of an exploding chocolate bar and a mess tin concealing bomb equipment. Original German propaganda leaflets (KV3/210) feature a spoof Evening Standard article and a peculiar document claiming to have been issued by supporters of Hitler in Whitehall that sets out the fate of England after it is defeated.

The full inventory of disguised weapons dreamed up by the Germans for their secret agents is not just an amusing bit of James-Bondian fantasy from the past, it's a cautionary set of precedents for terrorism today:

Posted by Christopher Dickey at 4:38 PM

Hi, I am Omid Memarian and Iranian Journaslit. I found your blog so informative and original...